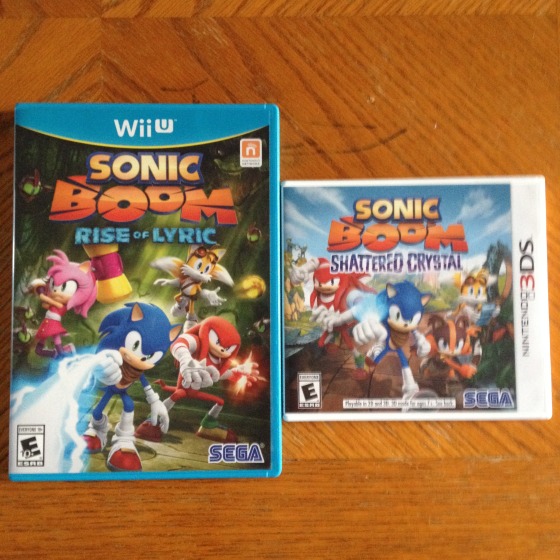 I was sent copies of the two brand new Sonic Boom games. Opinions of the games are 100% my own.

I’ve been looking forward to the new Sonic Boom games for the Wii U and the Nintendo 3DS. These games are part of an entire media franchise around Sonic the Hedgehog and his pals, Tails, Amy, Knuckles and Sticks. Each game lets you team up with these pals and find your way through a larger world. I’ll discuss each game separately although they have a connection to each other. You can actually connect the 3DS game to the Wii U game and when you do certain things on the 3DS games it unlocks things on the Wii U game. That is a fun little connection between the games.

This has been one of the few Nintendo 3DS games that I have thoroughly enjoyed in a while. The game is fast paced and fun. You start off playing as Sonic and as you progress around the world you catch up with Tails and then Sticks and Knuckles is probably the 4th guy you catch up with because Amy gets captured by Lyric right off in the beginning.

Yes, Lyric. Lyric is an ancient snake that has a robotic torso with arms. He’s big and mean and has a beef against Sonic that eventually we’ll learn more about as we play the game. You learn a lot more about Lyric in the Wii U game.

So, you go around to different parts of the game and you end up playing various levels over and over because as you find more of your friends you can play as them and use their abilities to find additional sections of each level. For instance, Tails can use updrafts to go to higher levels. Sticks and use her boomerang to hit hard to reach items and Tails can also use a submarine and other gadgets. In each level you find crystal shards and blueprints and tokens and other things that you can use throughout the game. Sticks can help repair the shattered crystal, Tails can use blueprints to create new gadgets.

Each level has certain achievements to hit and I have found myself trying over and over and over to get the best scores on the levels. This is partly because of my OCD nature but also because the levels are fun to play. Each character’s abilities are fun to use and they are what you would expect to see in a good Sonic game.

So, sonic and his friends are hanging out and they are attacked by Dr. Eggman and some of his robots along with some new ancient robots. While fighting these robots Sonic unwittingly enters a temple and he and the friends accidentally free Lyric. Lyric is a pretty bad guy and it is up to Sonic and his friends to stop his evil plan. You can easily switch between playing as Sonic, Tails, Amy and Knuckles. I haven’t met Sticks yet in this game but I figure that I will eventually although I am not sure if I’ll be playing as Sticks, she is not on the cover of the game. I also noticed that Amy is not on the cover of Sonic Boom Shattered Crystal.

Sonic Boom Rise of Lyric is an immense world that you can interact with in many ways. As you run, jump and use your energy bands you can also pan around and change the way you view the world around you. I haven’t played this game a ton but what I’ve seen so far has been way better than the previous Sonic Games I have played. I will certainly be playing more.