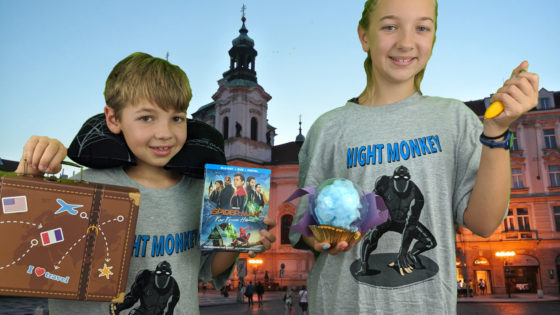 The special package that we received included a special mini suitcase that had an inflatable travel pillow that is Spider-Man themed, a couple of exclusive Night Monkey tshirts. These things are spectacular. There were some items to do some nifty science experiments which you can do at home, just download the .PDF below.

The kit also contained some items that we could use to make some special Mysterio cupcakes. Let’s just say that they involved cotton candy! You can see the one that Eva made in the photo above. We also received a copy of the movie on Blue-ray and my review is below. 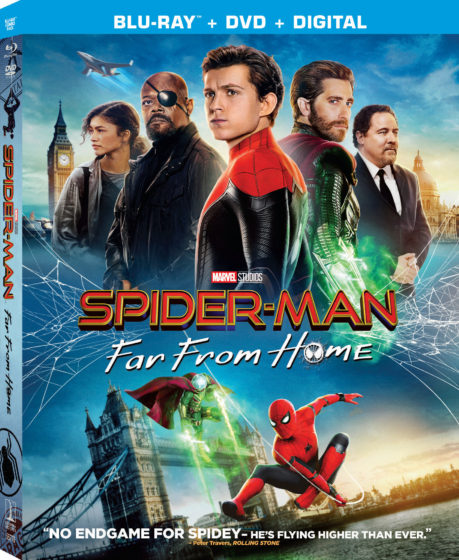 In Spider-Man Far From Home we find Peter Parker and his friends on a special field trip overseas. Peter just wants to have a nice normal time with his friends without all the craziness of being a super hero. The problem is, being a super hero doesn’t mean that you get any time off. At any moment there could be a huge lava monster trying to attack you and your friends at a carnival. Maybe you are going to a nice gondola ride and a water villain attacks. Or maybe super spy, Nick Fury straight up kidnaps you and makes you help some new hero. Poor Peter.

I enjoyed Spider-Man Far From Home very much. It came quickly on the heels of Avengers: Endgame and it is very much an epilogue for the first 10 years of the MCU. Peter already has great responsibility and he gets even more heaped upon him when he received E.D.I.T.H.. E.D.I.T.H.is a pair of glasses that Tony Stark left to Peter along with everything that it controls in Stark Industries. Peter is not quite sure he wants all that responsibility and so when given the chance to find a hero who is more worthy than him he decides to give up the control and E.D.I.T.H.. Not exactly the smartest thing that Peter could do because that hero ends up being a fraud and Peter has to again learn from a big mistake and set things right. 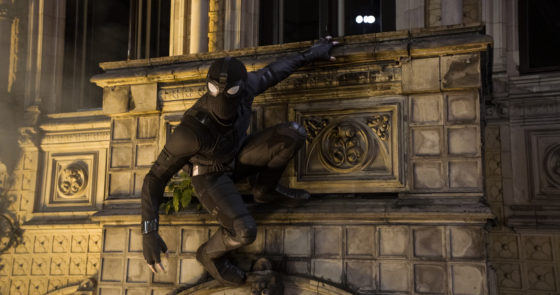 How can You Get Your Hands on a special prize pack that includes the Night Monkey Tshirt?

You can enter my giveaway below and you will receive a Spider-Man: Far From Home shirt, a travel card wallet, and a DVD!  Use the Rafflecopter widget below and make sure that you leave a comment on the bottom of this post in order to qualify for the giveaway.

I also have full details of the movie and a bunch of fun clips.

THE BIGGEST SPIDER-MAN MOVIE EVER WILL BE OUT TOMORROW ON 4K ULTRA HD™ COMBO PACK, BLU-RAY™ COMBO PACK, DVD AND DIGITAL!

COMPLETE YOUR COLLECTION WITH SPECIAL FEATURES INCLUDING AN ORIGINAL SHORT, NEVER-BEFORE-SEEN ALTERNATE AND EXTENDED SCENES AND MUCH MORE!

Tom Holland returns as everyone’s favorite web-slinger in SPIDER-MAN: FAR FROM HOME, the next chapter after Spider-Man: Homecoming. Our friendly neighborhood wall-crawler decides to join his best friends Ned, MJ, and the rest of the gang on a European vacation. However, Peter’s plans to leave super heroics behind for a few weeks are quickly scrapped when he begrudgingly agrees to help Nick Fury uncover the mystery of several elemental creature attacks! Spider-Man and Mysterio (Jake Gyllenhaal) join forces to fight the havoc unleashed across the continent but all is not as it seems.

The Blu-ray, DVD, Digital, and 4K Ultra HD release arrives filled with bonus materials for the whole family including a special short, alternate and extended scenes, gag reels and Easter Eggs! Additional special features include Teachers’ Travel Tips with Mr. Harrington and Mr. Dell and interviews with the cast and crew focused on stunts and location in The Jump Off and Far, FAR, From Home. Explore how Spider-Man was introduced in the MCU in Stepping Up and get a closer look at the special chemistry between Jon Watts and Tom Holland in It Takes Two. Fans will want to dive into The Ginter-Riva Effect, Thank You, Mrs. Parker and Now You See Me features for more character focused details. The 4K Ultra HD also features Dolby Vision and Dolby Atmos audio.

SPIDER-MAN: FAR FROM HOME has a run time of approximately 129 minutes and is rated PG-13 for sci-fi action violence, some language and brief suggestive comments.

31 thoughts on “Spider-Man: Far From Home – Review and Giveaway”