Today Eva was in her first play with the Triboro Youth Theater. The play was called Get Hoppin’ and she was a robin. She has enjoyed being a part of the cast for the past few months. A couple of mornings each week Eva and I would listen to the music CD on the way to school. We would sing together and get her ready for the play.

I worked last night so I tried to get a little sleep before the play. The play was at 11am and so I set two alarms. One for 10:15am and another for 10:20am. Both had loud music alarms. I slept right through both of them and 4 texts from Allison. Allison called me at 10:50am and I finally woke up, sprinted out of bed and got over in time to see the show. Next time, I don’t wear the earplugs.

The show was nice. The kids had great costumes and there were a ton of kids on the stage, too. There were narrators, Bunnies, Robins and Fish. The Bunnies had little bunny ears and the fish and bunnies had t-shirts that had hoods on them. Eva looked so cute in hers. 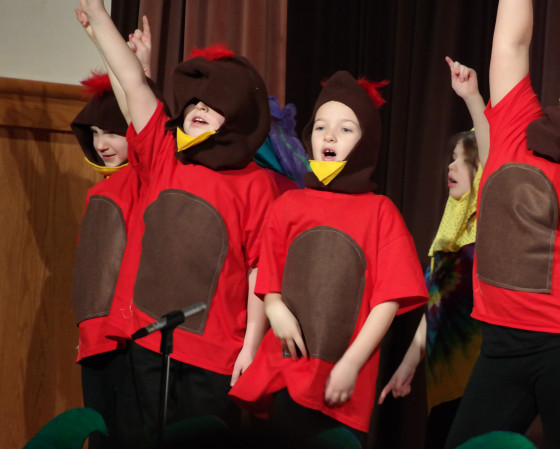 There were quite a few fans in the audience for Eva. Us, Mom and Dad, Aunt Tara, Uncle Erik and Auntie Shelby. Even Eva’s good friend Audrey was there. 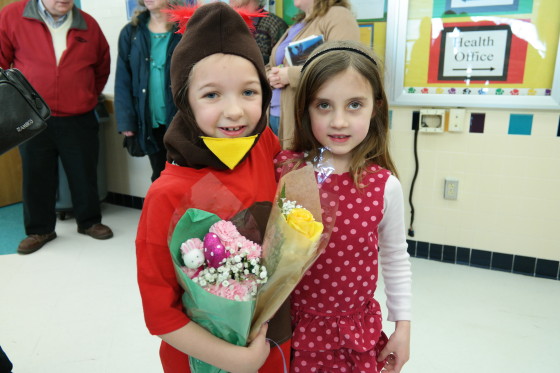 After the play we had lunch over at house of Fortune. It was so funny watching Andrew and cousin Dylan having a conversation together. They were both doing some crazy babbling. Andrew can say Baby Dylan, we’ll have to have him start saying Cousin Dylan instead. I can’t believe the little guy is already 9 months old. He’s like a little boy and no longer a baby.

I shot the photos with the new Samsung NX30. Inside the theater it came in handy to have the electronic viewfinder because that way I wouldn’t need to use the screen and that would have been way too bright for everyone around us. Good feature.