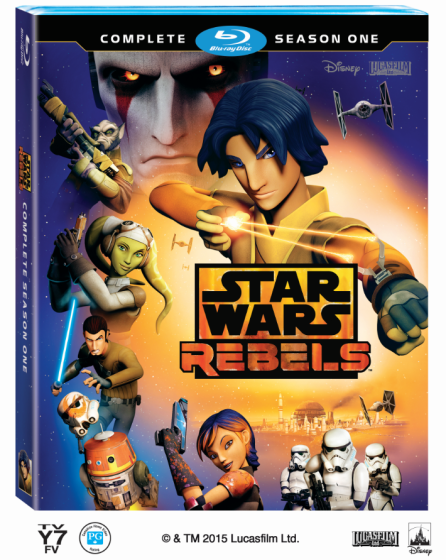 Star Wars Rebels is one of my favorite shows. I like it a lot because Eva and I watched it together and this was her gateway into Star Wars. Since that time Eva has seen Star Wars: A New Hope and she is eager to watch more. Star Wars Rebels was that perfect show to come along and get Eva excited about Star Wars which makes this Geek Dad Proud.

Would you like to share this great show with your kids? I’m giving away a copy of the Season One Blu-ray. Enter through the Rafflecopter App below.

More about Star Wars Rebels can be found below.

Here is a photo gallery on the show.

A Spark of Rebellion Ignites the Galaxy in Star Wars Rebels: Complete Season One!
On Blu-ray™ and DVD September 1, 2015

Star Wars Rebels: Complete Season One delivers all 15 action-packed episodes plus never-before-seen bonus material and cast/crew interviews revealing the magic behind the making of the hit series. Releasing on Blu-ray and DVD on September 1, this is a must-add collection to the library!

In the first groundbreaking season of Star Wars Rebels, young hero Ezra Bridger joins the clever but motley crew of the starship Ghost in their resistance against the Empire. As the series begins, Imperial forces have occupied a remote planet, ruling with an iron fist and ruining the lives of its people. Ezra and his new rebel friends — Hera, Kanan, Sabine, Zeb and Chopper — embark on daring adventures in their fight against oppression across the galaxy, receiving help from familiar heroes such as Lando Calrissian, Ahsoka Tano, and Jedi Master Yoda. Pursued relentlessly by the Imperials and a Jedi hunter called the Inquisitor, this tenacious ragtag band of rebels will find itself in the crosshairs of none other than Darth Vader when season one closes in a shocking two-part finale.

Featuring the voices of Freddie Prinze Jr. (“I Know What You Did Last Summer”) as Kanan, Vanessa Marshall (TV’s “Young Justice”) as Hera, Steve Blum (“The Boxtrolls”) as Zeb, Tiya Sircar (“The Internship”) as Sabine, Taylor Gray (TV’s “Bucket and Skinner’s Epic Adventures”) as Ezra, David Oyelowo (“Selma”) as Agent Kallus and Jason Isaacs (“Harry Potter”) as the Inquisitor.

ABOUT THE WALT DISNEY STUDIOS:
For over 90 years, The Walt Disney Studios has been the foundation on which The Walt Disney Company was built. Today, the Studio brings quality movies, music and stage plays to consumers throughout the world. Feature films are released under the following banners: Disney, including Walt Disney Animation Studios and Pixar Animation Studios; Disneynature; Marvel Studios; Lucasfilm; and Touchstone Pictures, the banner under which live-action films from DreamWorks Studios are distributed. The Disney Music Group encompasses the Walt Disney Records and Hollywood Records labels, as well as Disney Music Publishing. The Disney Theatrical Group produces and licenses live events, including Disney on Broadway, Disney On Ice and Disney Live!