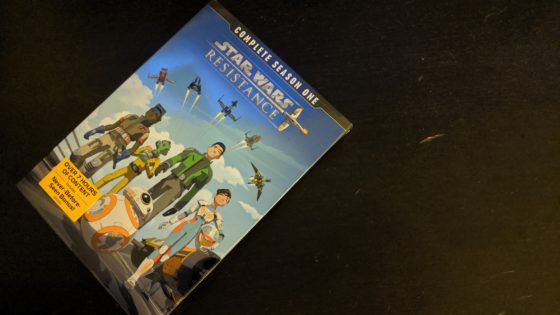 I was compensated in the form of a a copy of Star Wars Resistance – The Complete First Season on DVD for free. Giveaway prizes were also provided for free All opinions are my own.

I am very excited to have the opportunity to do a giveaway of Star Wars Resistance – The Complete First Season. I have two copies of this DVD set to give away. This is an Emmy Nominated Series for Outstanding Children’s Program. I started watching the series and it s really good. Cool animation and a great story. You can read all about it below. But for now please enter using the Rafflecopter App below. Make sure that you leave a comment at the bottom of this post in order to be eligible to enter. The giveaway is open only to those over 13 and with a U.S. Address.

More on the show below.

Star Wars Resistance: Complete Season One delivers more than eight hours of entertainment including 21 action-packed episodes, 4 audio commentaries, 12 bonus shorts and an exclusive sneak-peek at the making of the series with cast and crew.

The first season follows Kazuda (“Kaz”) Xiono, a young pilot recruited by Resistance hero Poe Dameron for a top-secret mission to spy on the growing threat of the First Order. Stationed aboard an aircraft refueling station, Kaz quickly finds himself in over his head as he struggles to keep his cover as a mechanic while gaining the trust of his newfound friends. They find themselves entangled with ace pilots, marauding pirates and creatures of all shapes and sizes.

Fast, fun and told in a vibrant anime-inspired style, this high flying adventure brings a new perspective to the events surrounding Star Wars: The Force Awakens.

COMPOSER: Michael Tavera (“Guardians of the Galaxy”) – Based on themes by John Williams

ABOUT LUCASFILM LTD.:
Lucasfilm Ltd., a wholly-owned subsidiary of The Walt Disney Company, is a global leader in film, television and digital entertainment production. In addition to its motion-picture and television production, the company's activities include visual effects and audio post-production, cutting-edge digital animation, interactive
entertainment software, and the management of the global merchandising activities for its entertainment properties including the legendary STAR WARS and INDIANA JONES franchises. Lucasfilm Ltd. is headquartered in northern California.

ABOUT THE WALT DISNEY STUDIOS:
For over 90 years, The Walt Disney Studios has been the foundation on which The Walt Disney Company was built. Today, the Studio brings quality movies, music and stage plays to consumers throughout the world. Feature films are released under the following banners: Disney, including Walt Disney Animation Studios and Pixar Animation Studios; Disneynature; Marvel Studios; Lucasfilm; and Touchstone Pictures. The Disney Music Group encompasses the Walt Disney Records and Hollywood Records labels, as well as Disney Music Publishing. The Disney Theatrical Group produces and licenses live events, including Disney on Broadway, Disney On Ice and Disney Live!.