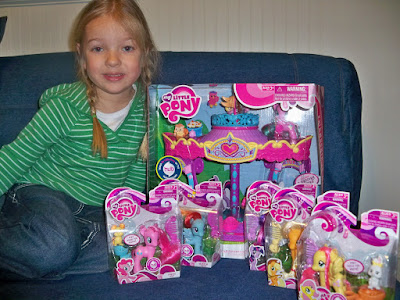 To kick of SwagsGiving we have some toys that are pretty big hits in our house. I’m talking My Little Pony. When My Little Pony: Friendship is Magic debuted on The Hub, we were there. I figured I’d try out this new show with Eva and see what she thought of it. I certainly was surprised to become such a fan of a show about cute little ponies. But these are not the My Little Ponies of my, ahem… sister’s, youth. No, these are ponies from a smart and funny hit show that boasts tons of male viewers called bronies. I consider myself one of those guys. This show bridged the gap for kids shows to watch with Eva. I enjoy the show as much as she does.

The My Little Pony toys run the gamut though. There are ponies that look like babies, there are some that are show accurate (well, minus Apple Jack’s hat of course). There are ponies with rooted hair and ponies with molded hair. The ponies that we are reviewing have rooted hair, that is hair that you can brush. And you can brush it because every pony with rooted hair comes with their own comb or brush. We were sent a set that included all six of the ponies that star in My Little Pony: Friendship is Magic. There was Twilight Sparkle, Pinkie Pie, Rainbow Dash, Apple Jack and Fluttershy. We also received the playset Rarity’s Carousel Boutique. This playset has a working musical carousel that plays the opening theme song (instrumental) to the My Little Pony: Friendship is Magic show. Even the opening theme is smart. It starts with the classic well known theme that is soft and very fluffy and then kicks into a rocking updated song. The theme song always gets Eva up and dancing. She even starts dancing to the theme on this playset.

There is a seventh pony. Rarity’s Carousel Boutique comes with a second unicorn pony. This pony is not named and I tried my darnedest to find this pony on a wiki or even on the Official My Little Pony website. Try as I did, I was unable to find the pony’s name. This would have been nice to have put on the package or anywhere really. Eva named her Ice Cream Girl because she has an Ice Cream Cone cutie mark. That will work for now but it irks me a bit not to have a name for this pony. I even searched Wikipedia and other places but did not find this pony anywhere.

Kurt linked out to who this pony is in the comments below. Apparently the pony is named Sweetie Swirl!

Each individual pony that we received either has a saddle or a cart to pull. That is because they come with animal friends. This is not show accurate because if it was then instead of a random bird, Twilight Sparkle would have Spike the baby dragon and Pinkie Pie would have Gummy the little alligator. The only one that was close to show accurate was Fluttershy with a rabbit as her animal friend. She does talk to many animals but mostly to the bunnies. Maybe that was intentional and maybe it was a coincidence.

Each of the ponies are well made and cute. They stand up without falling over and their accessories fit pretty well. The carts that come with the Pegasus ponies (Rainbow Dash and Fluttershy) slip off the back legs easily but that is the only thing that they can use because their wings make saddle impossible to put on.

This set is great for the My Little Pony fan in your life because it has all the major pony friends and your kids can play out their own Friendship is Magic stories. Now, if they’d only release a Derpy Hooves character and make all the show characters with molded hair that would be great.

Would you like to win your own set of My Little Pony: Friendship is Magic figures? 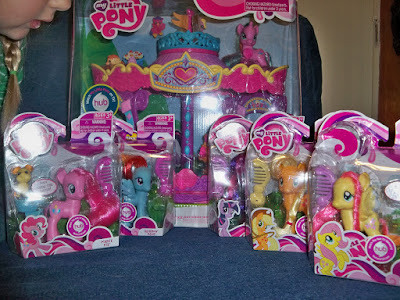 Enter below through the Rafflecopter widget.