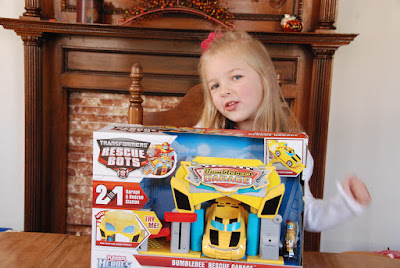 The story behind this new line is that Optimus Prime has some new recruits that need to learn the ways of the human people. These are younger Autobots who will work side by side with a team of humans to protect, learn from and befriend humanity. Optimus Prime is a part of this storyline and BumbleBee is also a part of the storyline. The Rescue Bots have a couple of special bases and one is the Prime Fire Station. This is the main base of operations and serves as both a Fire Station and a secret base where the humans who work with the Transformers can live and train together. The other base is the BumbleBee Rescue Garage. This is a smaller set that includes a “driveable” BumbleBee, an Axel Fraser figure and a tow hook to rescue other vehicles. The BumbleBee figure in this playset does not transform but rather has a space for a driver so that the human figures can fit inside BumbleBee and drive him around. The BumbleBee vehicle can be stood on end to reveal a robot figure underneath so kids can play as if they are using a robot figure. 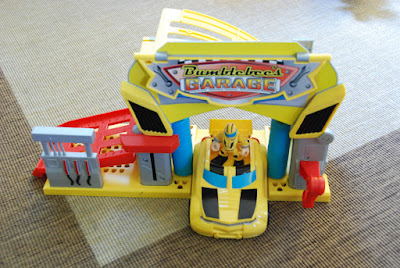 The BumbleBee Rescue Garage also allows you to launch the rescue bots in vehicle mode. Push a lever to bring the lift all the way to the top and there is a ramp that the cars can race down and then off on their special missions. This is a nice feature but you have to press the lever in a controlled manner or the cars will not race down as expected. If you push the lever straight down as hard and fast as you can the car will bounce off the platform and not race down the ramp. 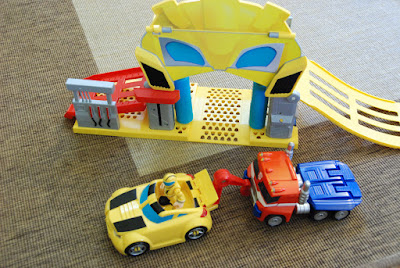 The station itself also is in disguise. It isn’t until you lift a car up to the top of the ramp that the sign for BumbleBee’s garage flips down to reveal the face of BumbleBee. The station is a nice addition to the growing Rescue Bots line that already has six transforming robots and ten human figures (some are duplicates as they come with the playsets and there are additional multiple figures with new equipment.) I bought Eva her first Transformers Rescue Bot, Optimus Prime and then picked up Heatwave and BumbleBee plus all the human figures that were out at the time and also the Prime Fire Station. These were her birthday gifts and some figures I’m holding on to until the robot counterparts are in stores. Each robot is paired with a human including the Optimus Prime character.

I liked the BumbleBee set but I would have liked it more had there been a storybook included with it like there was with the Prime Firestation and like there are books included with the Electronic Chase and Electronic Heatwave figures. Eva loves having me read the book to her and that thrills me to no end since I am a Transformers fan from back in 1984. If a storybook was included with the playset I’d be very happy because I believe that having a story around the figures and playsets is what helps to ignite the imaginations of kids. There will be a television show coming in 2012 on The Hub all about Transformers Rescue Bots and I look forward to watching that with Eva and then later on with Andrew. I think that Transformers Rescue Bots is a great jumping on point for kids to get into the Transformers line of toys.

If you’d like your own Transformers Rescue Bots BumbleBee’s Garage then enter to win below.

Please use the rafflecopter widget and follow all of the directions. The first direction is to leave a comment on this post (scroll to bottom to the comment section) after you’ve visted the Transformers Rescue Bots website and tell me the names of some of the Rescue Bots. Then click the “I did this” button on the rafflecopter widget. You can gain more entries by doing other tasks after that. But you must do the first steps to enter.