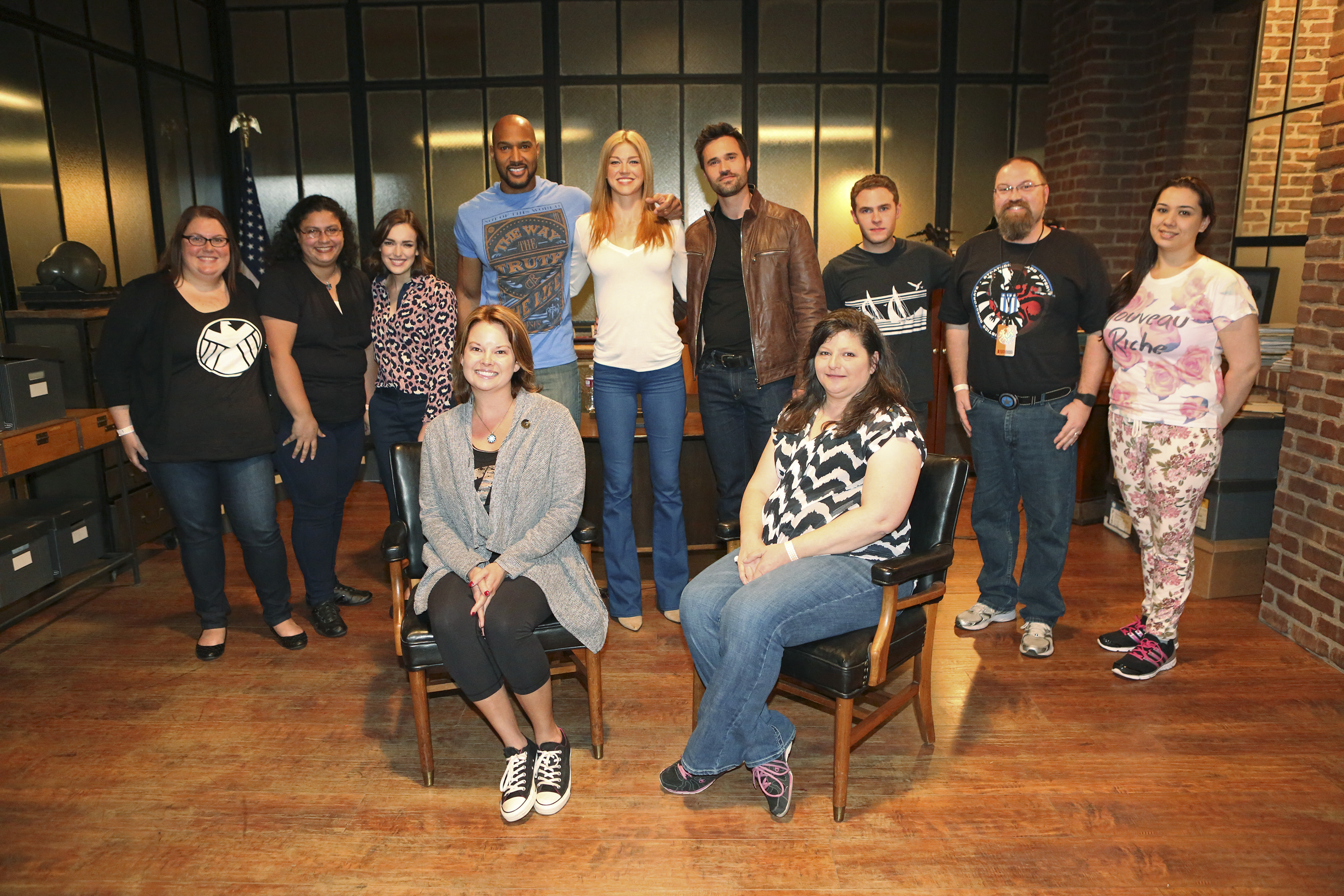 I attended an expense paid trip by Disney to press events for Marvel’s Agents of S.H.I.E.L.D. (#ABCTVEvent, #AgentsofSHIELD), all opinions as always are 100% my own.

I’ve had many very cool experiences because of this blog. One such experience was being on the set of Marvel’s Agents of S.H.I.E.L.D.. I was there for a set visit and also to be part of a couple of group interviews with members of the cast. There were 24 other bloggers along as well and we had a once in a lifetime tour of this top secret set. The production really does take the whole secrecy angle of the world of Agents of S.H.I.E.L.D. to heart. Even as I write a number of posts about the experience there are things that I must keep undisclosed like a real spy.

But, I’m no spy, I’m a blogger and a complete fan of Agents of S.H.I.E.L.D.. I have been a fan since the very first episode. I stuck through as the show found its footing and then hit its stride. Now it is very highly anticipated and each week brings something new and interesting. The thing that I like about it are the complex relationships that the characters have with each other. The character that I most identify with is Agent Fitz. His relationships with three other characters have been a source of many moments of triumph and despair. In the first season Fitz looked up to Agent Grant Ward like a big brother. They had one intense op in the first season together and bonded. Then Ward betrayed S.H.I.E.L.D. and attempted to kill Fitz and Simmons. That betrayal left Fitz with a major brain injury.

Then in the second season we learn that Fitz has this brain injury from his being trapped underwater by Ward. He and Agent Simmons had been a team that was so close that they were referred to as Agent Fitz-Simmons. The two pulled apart from each other at the beginning of the second season and they have had many disagreements. A new character from season two that became friends with Fitz was Mack. Mack helped Fitz heal and come to terms with his injury while also bringing him back into the team as an integral part. But then Mack was revealed to be a part of the “Real” S.H.I.E.L.D. and Fitz was betrayed once again. END_OF_DOCUMENT_TOKEN_TO_BE_REPLACED

This coming Thursday is a big day. I will be heading to LA (All Expenses for Travel are being paid for. Opinions as always are 100% my own) to screen the upcoming movie, Avengers: Age of Ultron. But I’m not just flying across the country to watch a movie. No, there is going to be so much more happening. To prepare for the event I went to the Mall yesterday with the family to pick up a few things. But I already had a bunch of Marvel stuff on hand because I have been a fan for a long time. Pictured are a few things that I’ll be bringing with me on the trip. I am sure I have a few more things that will be coming with me as well.

I have had a Captain America Shield belt buckle for a while now. I just ordered a new belt. I had picked one up from Hot Topic but it didn’t work so well. That new belt should arrive on Monday. I also bought a Marvel wallet at Hot Topic that I love but forgot to take it out of my pocket for the photo. I’ll have to shoot that later. There is a Captain America Shield T-Shirt that my sister got me for my birthday. I grabbed a roll of Avengers themed tape. Not sure what I’m going to do with that. I also grabbed a Captain America Funko pop keychain. Rounding out my stuff are two things from my most recent Loot Crate themed COVERT. The are a Marvel’s Agents of S.H.I.E.L.D. lanyard, the one that Agent Eric Koenig was always reminding people that they need. I also have a spy watch that tell the time when you press the watch face. Otherwise it is flat black.

It is funny. I sometimes think that I am like Iron Man but the more and more I gravitate towards Captain America. I don’t think I could pull off the cool factor that Tony Stark has. I’m more the quiet confidence of Steve Rogers. Can’t wait to see these two in action at the movie. I also can’t wait to meet Chris Evans, the actor that plays Captain America, while at the #AvengersEvent. See who else I’m going to interview below. END_OF_DOCUMENT_TOKEN_TO_BE_REPLACED