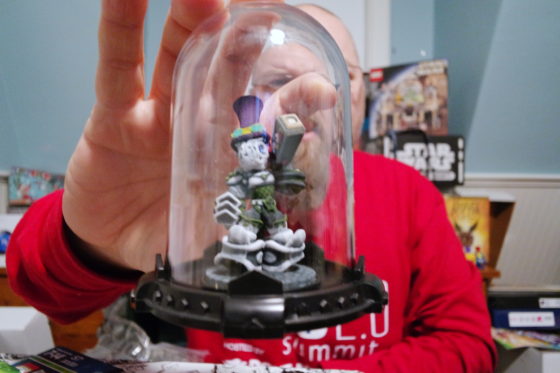 Today I returned home from the Dad 2.0 Summit. I wasn’t sure what would await me in terms of the snow that would be all over my car. I had to park on the roof of the parking garage when I flew out and it snowed multiple times while I was gone. The snow was what made me arrive a couple of hours after I was scheduled to arrive home in the first place. I finally arrived home around 3:30pm. Not terrible but not great, the day was pretty much shot. Everyone at home had been enjoying, or was quite sick of, the snow that we had. Thanks to Allison and the kids and our neighbors and my dad came to shovel us out while I was gone. I now have to figure out what to do about the snowblower as it is not functioning.

I also returned home to a bunch of boxes. I received packages containing some LEGO Dimensions packs including the LEGO Batman Movie Story Pack and the Excalibur Batman Fun Pack. These are for reviews later on. I also received the Skylanders Imaginator that I created and had 3D printed. It came out so good, too. My friend Wayne sent me a ton of Modibot pieces and figures so that I could use them to try and make some stop motion videos. I also received the Loot Crate Marvel Gear + Goods crate and I’ll do an interesting unboxing later this week, too.

Today we flew home from Florida. We had a 7:45am flight and we were up at 4:45am to assemble everyone and get on the road. Now having two kids security seems even more daunting to me. I was pretty good about it today and everything went very smoothly. We even managed to get all the luggage under 50lbs too. Once through security we had some breakfast and then boarded the plane. We were in the A boarding group so we had a decent pick of seats. Just grabbed an empty row and settled in. Andrew and Eva were both wonderful for the whole trip. END_OF_DOCUMENT_TOKEN_TO_BE_REPLACED