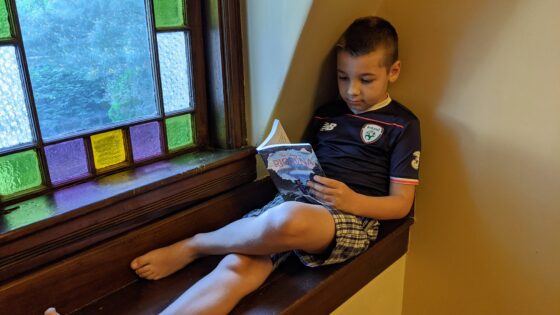 We received a copy of The Way to Rio Luna for free to read and review. Opinions are our own.

I am a fan of fantasy books. I’ve read all of the Chronicles of Narnia and Harry Potter and the like. I don’t think I’ve ever read a book that approaches magic quite like this one. Our main character, Danny Monteverde appears to have read these books as well and he believes that magic is real. It is his belief in magic that gets him through some very difficult times in his life.

Danny is a foster kid who has been kicking around from home to home. His older sister is placed in separate foster care but she goes missing. It is up to Danny to find her and he believes that she has found a way to Rio Luna. Rio Luna is the land of some fairy tales that he and his sister loved and Danny is out to prove that it is real. His personal mission is to find this Rio Luna and his sister.

I read it and enjoyed it. I gave it to Andy to read and found him crying. The beginning of the book is rather sad. You have this boy, Danny who loses everything including his big sister. He is shuffled from foster family to foster family and never quite finds the right place. He’s desperately searching again hope to find his sister. It’s a bit heavy for an eight-year old who is quite sensitive. I encouraged him to keep at it because Danny has hope and he, Andy the reader, should also have hope. He continued to read and enjoyed it.

The book is recommended for ages 8-12). More information abort the book can be found below. If you are interested in purchasing a copy of the book, please consider our Amazon.com affiliate link. below as well. END_OF_DOCUMENT_TOKEN_TO_BE_REPLACED 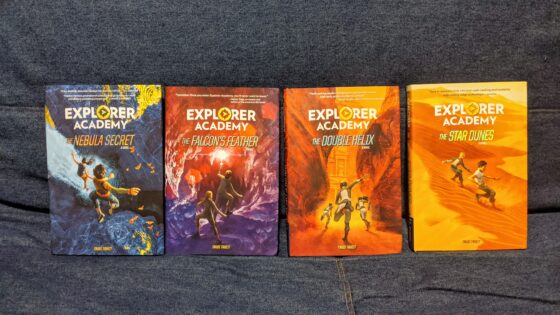 We received the entire series of Explorer Academy from National Geographic Kids Books for free to read and review. Opinions are our own.

When I was a kid my Aunt gave me a subscription to National Geographic Magazine. These amazing magazines with information from all over the world had eye popping photos and so much information. It was so cool to look at the photos. I can’;t say that I read too much of the articles and that is too bad because the articles have such great information. Maybe if the amazing information was presented to me like that which is in the Explorer Academy series I would have gotten more excited about learning about things in nature. I love the Explorer Academy books because they aren’t just cool action adventure books but rather they are based in scientific facts. Sure there are things that are not possible right now like the CAVE (Computer Animated Virtual Experience) Missions that the students have but we are getting very close with virtual reality so I bet that will be almost outdated in a couple of years.

The CAVE is an immersive program that the students use to prepare for real world missions. I love that this is part of the book because it means that the students can go anywhere and experience so much while remaining safe. It also shows me what sort of things could be brought to students to educate them on the world around them. One of the missions in the first book is to the Monarch Butterfly Biosphere Reserve in El Santuario del Rosario, Michoacan, Mexico. I’ve seen video of the place and would love to visit it in my life but that probably won’t happen. I’d even want to experience it like the students do in the CAVE Mission. A virtual reality experience would be so amazing and that is the sort of thing happening in the book. You have students learning how to be good eco-citizens and conservationists and explorers.

I thought that this would be a great series for Andy because he loves animals so much. I think he got a little scared off the beginning of the book because , in addition to the main character going to this new school he’s also nearly been killed by a mysterious man and his mother died in an accident that may not have actually been an accident. So there is a mystery to solve within this series. I think that may have scared Andy a bit. He’s very sensitive to bad things happening to characters in stories. It may have felt a bit too real for him.

Not only is there an overall mystery there are many secret codes and puzzles to solve within each book. The back cover lists the author, Trudi Trueit and the illustrator Scott Plumbe which is pretty standard for a book but there is also a code master for the book. The code master creates all of the puzzles and codes within the book. I don’t think I’ve ever seen that before and it is so cool.

This is an exciting series and I am eager to finish reading the books to get the full experience and also hopefully solve some of the major mystery. The most recent book is Explorer Academy: The Star Dunes and it came out back in March. You can pick up all four books on amazon.com and if you do so please consider using our affiliate links below. Please also see the official description of the series and the opportunity to read the first chapter of the fourth book.

Follow 12-year-old Cruz Coronado during his time at the prestigious Explorer Academy, where he and 23 kids from around the globe are training to become the next generation of great explorers. In addition to making new friends and attending cool classes, Cruz must also work to unlock clues to his family’s shadowy past if he is to solve the mystery of his mother’s untimely death. In this exciting follow-up to The Double Helix, a major discovery catapults Cruz and the Explorer Academy team into the limelight and they head off to Africa. Cruz and his fellow recruits tackle challenging missions to dispense life-saving medications to gorillas, thwart pangolin poachers and capture images of the last known cheetahs in Namibia — all the while discovering that protecting the world’s threatened species is dangerous business! After yet another strike from Nebula, someone close to Cruz ends up on the brink of death, leaving the ship in turmoil and Cruz and his team down a major player. The discovery of his mom’s next clue leads Cruz to a vast desert — and just when he thinks he’s run out of leads for solving the mystery of her tragic disappearance, an unlikely ally helps him pursue another piece of the ongoing puzzle. Can Cruz and his team stay one step ahead of Nebula and find the next piece of the hidden cipher?

With four critically acclaimed titles in this series now available, two companion nonfiction activity books and literally hours and hours of videos, games, and info on real-life explorers at ExplorerAcademy.com , Explorer Academy is the perfect way to keep kids learning, reading and engaged.The first chapter from The Star Dunes can be read here