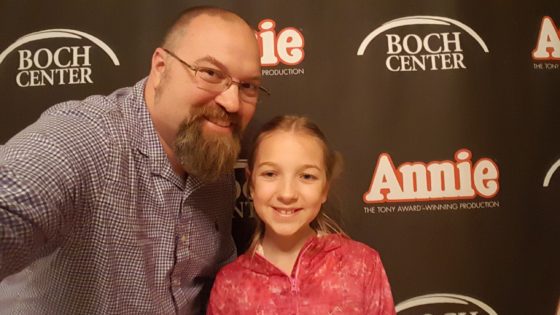 We received a family four-pack of tickets for free to see Annie on Opening night in Boston at the Wang Theater. Opinions are our own.

Going into Boston to see a show is always a special event with the family. We don’t do it that often but when we do we make an evening out of it. We headed up right after school and luckily the traffic wasn’t terrible. We got to Chinatown in plenty of time so we went over to Genki Ya for dinner. Eva loves this place because she can order sushi. We usually get Andrew a fried breast of chicken because he isn’t a fan of sushi but that changed on this trip. Andrew had his first sushi (Crazy Roll) and didn’t like it and then gobbled up his second sushi (tempura shrimp roll) and loved it!

After dinner we walked over to the theater and met up with my friend Joselin Mane. He is the man behind Boston TweetUp and has been a friend since the first MegaTweetUp back in 2009. He’s a social media star who attends 2 or 3 events daily. If you want to know where to go in Boston, he’s your guy!

We received excellent seats for the play and both kids settled right in to enjoy it. Eva, who has been doing a weekly theater program and has been in theater since she was five, was super excited for the play. She thoroughly enjoyed seeing it. The music and the dancing was fun. She got many of the jokes, too. Some we both missed because, let’s face it something that was funny in 1933 sometimes doesn’t quite translate. But much of it still holds up well. Andrew made it though most of the first act and then fell asleep, hard, on Allison. He slept through the end of the show, while I carried him to the car and all the way home. What a life.

In all, Annie is a great family performance that is worth seeing. The performances were well done and the girl who performed as Annie was fantastic.

If you are looking for tickets to the show you can go to www.anniethemusical.com and get tickets for shows from May 9 – 21st. You can also follow along on social media with @ANNIEonTour on twitter and www.facebook.com/AnnieTheMusical. More about the play below. END_OF_DOCUMENT_TOKEN_TO_BE_REPLACED 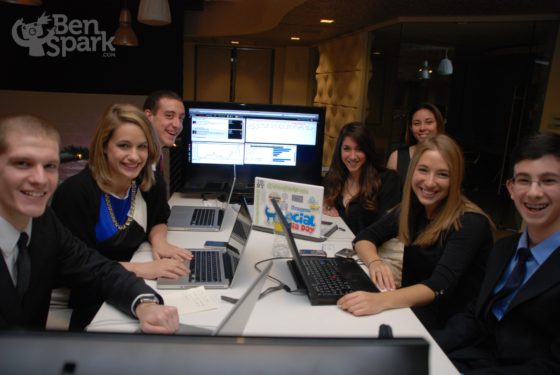 Tonight I went to the 2nd Annual MegaTweetUp at the Microsoft NERD Center in Cambridge. I attended MegaTweetUp last year and while I was there I took a ton of photos of people who won prizes. This year event organizer and all around awesome guy, Joselin Mane (@JoselinMane), asked me to be official photographer for the night. It was a lot of fun.