Yesterday I received Skylanders Swap Force in the mail from a PR company for Activision. Today I started playing the game. I was going to wait until I got the Wii U version from my pre-ordered Dark Edition from GameStop but I couldn’t wait and Eva wanted to play with me this morning. So, I opened the box and I played, a lot. I noticed a few things so far.

I do have some additional figures and a whole bunch of them are arriving tomorrow. I’ll be making videos of each one of them so that is why they are all still in their boxes. I’ve played with some of them in the box but will free them once I get these videos made. I’ll also try and get a little game time with the Nintendo 3DS version that arrived today. That game came with Free Ranger, Rattle Shake and Volcanic Lava Barf Eruptor. 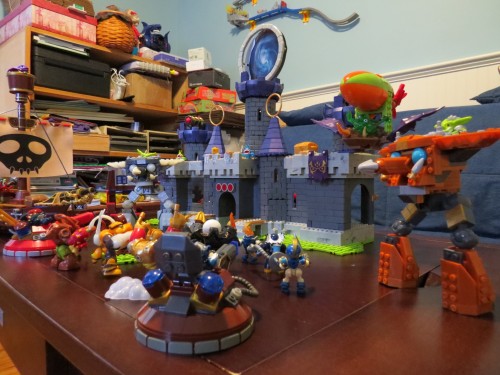 Of all the MEGA Bloks Skylanders Giants sets that we’ve been given to review, this one, the Dark Castle Conquest was the largest most involved build of them all and it was pretty awesome, to boot! The product was provided for the review and our opinions are as always, 100% our own.

The Dark Castle Conquest is a set with 924 pieces. You build the castle in three stages and there are three different instruction books to follow. When we started out the build we opened each bag of bloks and organized them on the table. I liked how bloks of the same size and color were in the same bags. I could open a bag and know that if here was a grey 2×1 piece then all of those grey 2×1 pieces would be in the bag and I wouldn’t have to look for them in other bags. I liked that organization, it makes for quicker building. I made the video of our build which cuts off my head at the end. I’ve got to figure out something to do about that in the future.