This morning Eva and I went for a trip to the supermarket. I had really wanted to take my bike out and experiment with the Ultra Intervalometer script for the Canon Hacks on my SD 800is. But it was raining, so off to the supermarket we went. I decided to experiment with the hack while at the supermarket. I rigged up my camera to the shopping cart and aimed it back at Eva and myself. I set the camera for a 20 second interval. Then it was off to do our shopping. Here is a video of what that looked like.

The video is also an explanation as to why I was not doing Wii bowling tonight. Was anyone, other than Dina from Market Leverage TV, aware that tonight I was going to do two games of Wii bowling to raise money for the Niemann Pick Disease Type C?

Market Leverage is doing a Charity Bowl-A-Thon on Tuesday night from 7:00pm – 9:00pm EST. I will do two games of Wii Bowling that night and I am asking you too please sponsor me at $0.10 a pin. You can sponsor one game or both. You can pick game 1 or game 2 to sponsor or both. The most you would possibly owe after game #1 would be $30.00 and that is if I bowl a perfect game. Let’s just say that I’m not a perfect game bowler. Let’s also say that combined game 1 and game 2 might not even equal a perfect game. I’ll set up the webcam and broadcast through stickam. Once the games are over I’ll post a video recap and let you know how much you should donate directly to the Niemann-Pick Childrenâ€™s Fund. You can donate online or via the mail, it is up to you. Here is more info about the Market Leverage Charity Bowl-A-Thon 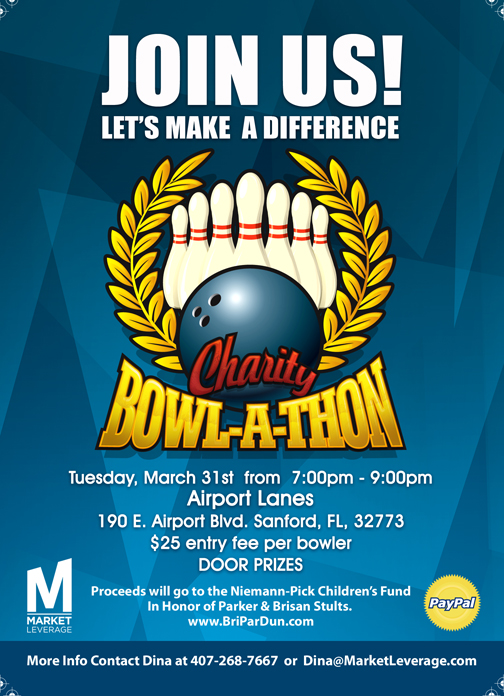 I decided to sponsor Tim Jones as he plays on Tuesday night as well as Dina Riccobono. I also sent Dina a package of goodies to give to participants including some BenSpark.com hats and Photo-A-Day Calendars. Market Leverage is also doing an online raffle to raise money and they have some great prizes. I really want to win the Flip Mino HD. What Can I say I can’t get enough of Flips with my face on them.

After creating the video above I went back to my 1st experiment with the Ultra Intervalometer and decided to redo that video and add in all the images. You can see all the images on Flickr including the GeoTagged map. But here is the video putting everything together along with an explanation of what I did to rig up the camera. I swear I’ll get this on a bike soon.

The whole Stroller Experiment from BenSpark on Vimeo.

As a father I am terrified about childhood diseases and anything that could hurt our little Eva. My heart goes out to the Stults family and if we lived in the Orlando Area I’d certainly be there bowling with the gang from Market Leverage. However I can still help even though we are far away. You can help as well. There are many ways to sponsor bowlers, lanes, t-shirts, you name it sponsorship opportunities abound. One of my blogger friends Tim Jones is going to be participating. I intend to sponsor his bowling for the night at 10 cents a pin. Let’s hope he bowls a perfect game. There are many other ways to sponsor the event. Take a look and help however you can, no donation is too small.

I can’t be at the event but I can be bowling that night, Wii Bowling. Would anyone like to sponsor me at $0.10 a pin as I play 2 games of Wii bowling? You can make the donation directly to the Stults family on their blog through paypal or you can donate via a check. I’ll bowl two games, video it and let you know my final pin count. Then you can make the donation to the fund. I’ll be Wii Bowling March 29, 2008, I’ll post the final pin count and video after the game and you can make a donation based on the pin count. How does that sound?