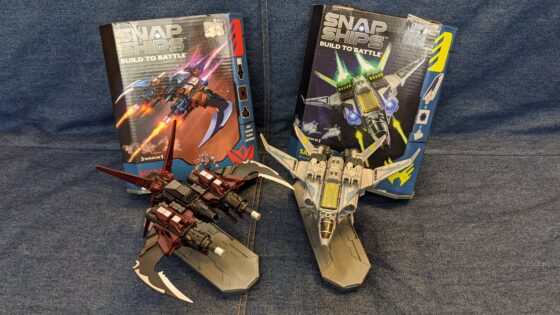 We received two Snap Ships from PlayMonster for free to play with and review. Opinions are our own.When I was at Toy Fair this past February, which seems like a lifetime ago, I was able to see Snap Ships and I was very excited because this was a whole new building toy with a storyline, cartoon and app. So many ways to interact with Snap Ships and I could not wait till they arrived. Well, they arrived back in June and things got crazy so it took me a while to really get in there and do an in depth review. I finally did one today.

There are a bunch of different Snap Ships to collect. Many on both sides of the battle. The good guys are The Forge and after watching all the episodes of Snap Ships season 1 on YouTube I learned more about the different characters from The Forge. I’m glad that I got the pilot, Klik to be part of my collection. He flies the Sabre XF-23 Interceptor. Actually he flies about anything. In the show the pilots fly all sorts of Snap Ships and they Build to Battle based on what they need.

The bad guys are The Komplex. They are trying to conquer Forge territory and are using ancient weapons called Uju tech. It is up to The Forge to put a stop to their attacks. You can watch all the episodes on the Snap Ships YouTube Channel

You can also see other Snap Ships reviews and learn about each pilot and their ships.

If you are interested in picking some of these up you can do so through our Amazon.com Affiliate link. We’d really appreciate that.