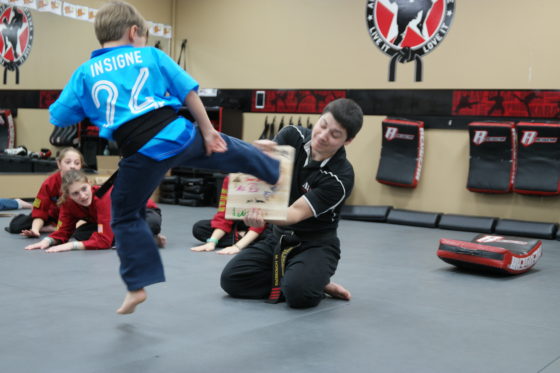 Andrew’s 6th birthday party was today. We went back to America’s Best Defense again because we had so much fun last year. Sensei and his team do an amazing job with the kids. There were about 20 kids at the party and they had a good time. There were two of the kids who didn’t want to do much participation but they ended up participating at the end of the party. They even broke boards. Board breaking was a big hit with all the kids. It always is. Eva even broke two boards at the same time. She did an excellent job of it, too. I love watching her participate in karate. Each time she does she shows such grace and confidence.

Andrew had a great time at the party. He was running all over the place with a huge smile on his face. When his friends began arriving he was very welcoming to everyone. They were excited to see him, too. The program that they run at the karate studio is excellent. They go over the many tenets of Karate with the kids and even get them learning how to do blocks and kicks and more. Each exercise was more to talk to the kids about respect and the kids responded to it very well.

The kids had pizza and then back to the floor to have more fun. When it was time to cut the cake the lights went out and the candles were lit. When the lights came back up sensei had the sword that they use to cut the cake. Andrew opted for the slow and dramatic cut again and it delighted all the kids. It was a nice party and many of the kids’ parents looked into taking advantage of classes for their kids.

Andrew turns 2 years old on Friday. We celebrated today with a make your own pizza party and a fantastic cake done by Allison. We had our friends and family over to celebrate. Our friend Holly came over with her two little ones. MY Mom and Dad, sisters Tara and Shelby and nephew Dylan came over as well. Allison made a triple batch of pizza dough so that everyone could make their own personal pizza. Then she made a triple layer marble cake frosted in green with colorful polka dots on it. Everyone had a nice time. It was a bit chaotic but so much fun to celebrate this little boy that we all love so much.