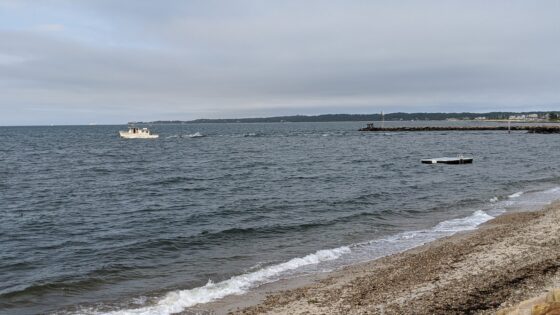 Allison and I have been getting out and taking walks each morning while we are on the Cape. Usually we walk up along Great Pond but today we went in the other direction because I wanted to surprise the kids with donuts. I learned that the Black Dog restaurant had them and wanted to check them out. I wasn’t that impressed. When I looked at them selection I had decided not to buy them but then I would have had nothing to bring back to the kids. They just didn’t look fresh. Like the humidity had gotten to them. But I got them and they were pretty tasty. The thing about donuts in Falmouth is that there is no selection. Dunkin Donuts is pretty much the only game in town and I am not a fan. I walked all over downtown Falmouth one weekend just to see if there was a bakery or something that made donuts. No luck. Internet search, no luck. Donuts has become a quarantine thing with us. Probably not the best option but it has been fun for everyone to try fun tasty donuts each week. 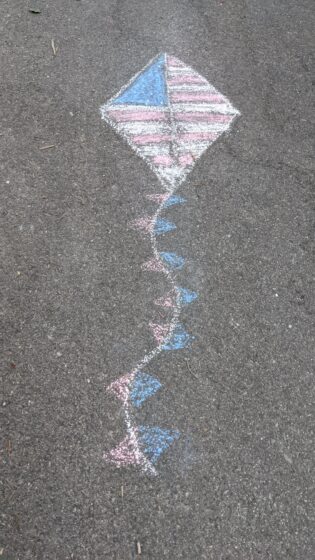 Taking a walk around the neighborhood and seeing the chalk art that the kids have been making. There were quite a few nice ones but I thought that this kite was the best one.

We went to the beach in the morning because it was going to be a busy, busy day there and we did not want to have to be encroached upon. The water was the best I had seen it in a while. It was so flat and there was very little seaweed that got churned up from the boats. It felt a lot like a calm before the storm. It ended up being a nice day and we got our beach time in nice and early.

I took a trip to Walmart and Stop & Shop in the afternoon to get things for the house. It was pretty busy getting in to Walmart but it was busier at Stop & Shop. Walmart was limiting the number of people who could go in to the store. I was in the line watching everyone come up to the line and walk away disappointed. It was amusing to me, not to the guy behind me. He was all sorts of peeved. Glad I had a mask even though it did not prevent the smell of smoke coming from this guy.

Eva, Allison and the kids watched Hamilton on Disney Plus with my mom. Eva had been very excited to finally get to see the play on Disney Plus. She was thrilled.