On Sunday Allison and I left Great Diamond Island. We had a lot of fun there but it was time to head home. I slept late while Allison read a book on the porch. Then we had some tasty donuts from a place called the Cookie Jar. Thea picked them up while we were in Portland on Saturday. At 9:40 the small bus that runs between the two docks on the island picked us up. There are two docks: The Diamond Cove dock that we could walk to and the Great Diamond dock that was one the other side of the locked gate. You see, on the island there was some spat over golf carts from the Diamond Cove being parked on the Great Diamond side and how unsightly they were. This started the Golf Cart Wars and this occurred about two years ago. Now the folks on each side of the island have separate stickers for their carts; as well as two locked gates separating the two sides of the island. It is all wound a bit too tight for my liking.

Elise and Charles were leaving today as well so the four of us took the ferry over to Portland and we said our goodbyes. After Elise and Charles left, Allison and I went to a little souvenir shop to pick up some dice games. They did not have Farkle but they did have Left Right Center, Moose Spotting and Two Lobster Catch and On The Rocks.

This is what I should have bought the day before. Actually we should have picked these up on Friday so we could have some travel games to play Friday night. But we have them now.

We headed down to York, Maine to meet up with our friend Maureen (She writes the We’re In A Fight blog) and her sister Peggy. Maureen and Peggy took us to lunch at Lobster Cove. Allison and I split a fisherman’s platter and it was very tasty. We then drove up Long Sands Beach and back to Mo’s house. Then her father, John, took us on a ride in his 1952 Chevy. It is black and named Josephine after the woman he bought the car from. It fits. We drove down to the beach and cruised along the strip. I kept taking pictures of the beach and the water when we were stopped and I had an opening between the cars. Because I was looking in the viewfinder I didn’t see anything beyond what the lens saw. So one time I took a shot and a second after I clicked the picture three 16 year-old girls walked by. Both Mo and her dad razzed me about taking pictures of 16 year-olds through the rest of the ride. They’d be like, “Drewbie there is another young girl, where is your camera,” or “oh what about that one, she’s too old huh?” I have no idea where Mo got her sense of humor, yeah right. We even went up to Nubble Lighthouse. It was a lot of fun but over all too quickly and we were back on the road. Then back to Manchester to pick up my computer and Allison’s car. We visited a bit with Marcia and then off again for home.

Once we got home I helped my sister download some pictures that she took this weekend at a fair in Walpole, NH as well as some videos. Allison ended up staying in NH for an additional 40 minutes. When she came home, we were off again and this time we headed to see my cousin, Carissa, and her boyfriend, Chris, before they left for their 2 week cross country trip.

For some reason we always need a vacation after our vacations. And this week is not going to get any quieter. You may notice a theme with the Photo-A-Day This week.

This is Jake. Jake is Elise and Charles’ dog. He is such a cutie. Jake is so full of energy and fun. Elise and Jake play with bubbles (animal friendly ones) Jake has a great time catching them in the air or stomping them out on the rug. I got a bunch of photos while he played. 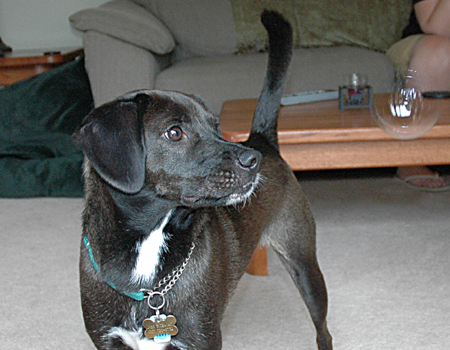 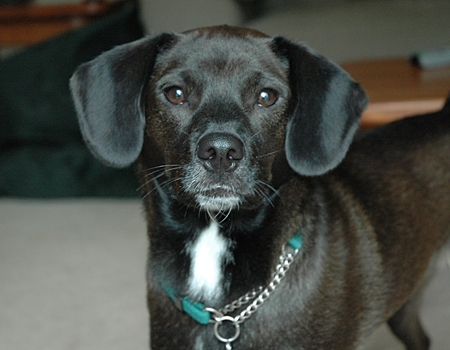 Take the Picture Quick, this is the most still I’ve been all day. 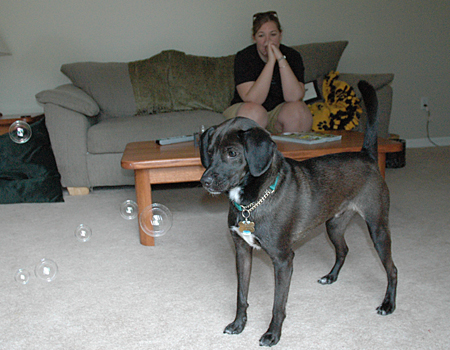 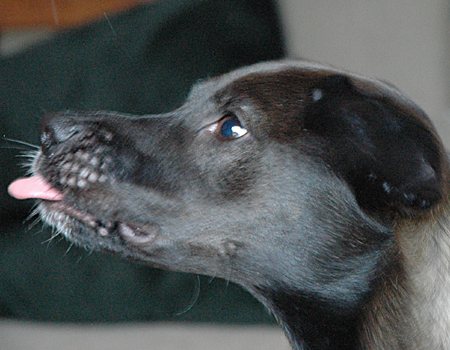 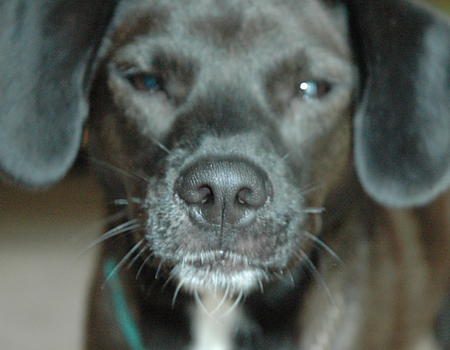 You Looking at Me! 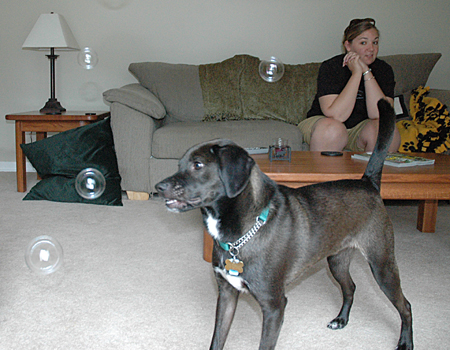 So today Allison and I drove to PA. The Pike to 84 to 81 and here we are. We made a couple of stops but we made it by 3:00pm. We listed to three CD’s from Eragon and it was good to go back and re-listen to the start of this series. Some things I picked up on more the second time around. We played, stop after every chapter to sort out the myriad of details. We played this game less and less as the day went on as Allison was picking up the story very quickly.

We had lunch at Marvelous Mugs and the meal was a very good one. Now we are at Elise and Charles’ house and are getting ready for dinner. Tomorrow we get up early for a trip to York to go to the Harley Davidson Factory for a tour. No camera’s are allowed inside so I’ll only get to take pictures in the tour center, bummer.

If you do not want to read about a terrible story of animal cruelty and my thoughts on it, stop reading now.

If you are an animal lover and live in Massachusetts you may have seen the very disturbing story that aired this morning on the news. I heard it this morning as we said goodbye to my parents. It was a story about a small dog that was viciously murdered by some sick individual who impaled the dog on an iron fence. I felt sick and the feeling stuck with me most of the ride to PA. (I guess that is why I wanted Jake to be today’s Photo-A-Day, he’s such a loving pet and so full of life.) How could anyone do that to a dog? Apparently the dog was taken on April 17th from the backyard of the owner and this past Tuesday some sick bastard picked up the 13lb miniature Pinscher above their head and slammed it down on the spikes of a wrought iron fence in Roxbury. How can someone do this sort of thing? I understand that people do much worse things to other people and that in perspective that this was a dog. I’m not going to argue the importance or value of one over the other, although some pets I like way more than some people. This sort of story will haunt me for a long time.

It is like the story where in a fit of ‘Road Rage’ some bastard got out of his car after a fender bender with a woman, reached into her car and pulled out her Bichon Frise and hurled it into oncoming traffic, got in his car and drove away. That story still sticks with me as an horrific, sick and evil act. I did a search on the story about the Bichon Frise – Leo. The guy who killed Leo got the maximum sentence for his crime, Three Years! Not near long enough in my opinion. That was in 2001, he’s out now.

Massachusetts is a state where animal cruelty can get you a five year jail sentence. I certainly hope that they capture the scumbag in Roxbury who killed the miniature Pinscher and toss his craven ass in jail. There’s more I want to say about what I want to happen to this loser this but it is not fit to print.

Sick, depraved, weak and despicable, there are no words evil enough to describe these actions. To take an innocent, helpless, dependent life and snuff it out without so much as a thought is detestable.