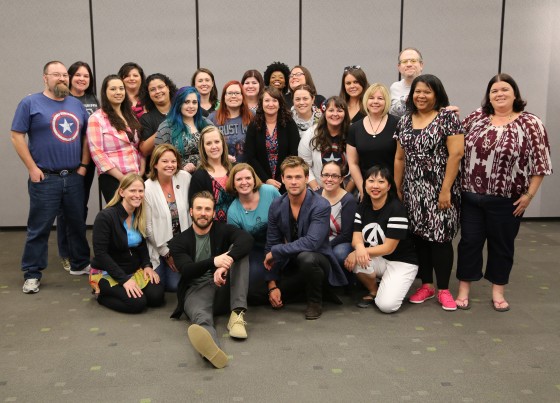 This interview with Chris Evans and Chris Hemsworth was our last interview of the day. It was also the most loose and from the hip. This was mostly because Chris 1 and Chris 2 (as they called themselves) were in very playful spirits. They laughed and joked and even asked each other questions in the interview. We learned that Chris Evans would like to have a bit more sass in his characters and we also learned where Chris Hemsworth would use his Thor-speak outside of the movies. It was a fun interview filled with lots of laughter from everyone involved. The guys even goofed around when it came to taking photos.

I had one question to ask Chris Evans and I got to ask it as the last question of the interview. I really liked his answer. I put the word out to people for questions and this one was the best of the bunch.

What aspects of Captain America’s personality are coming from you and what are the most difficult to portray?

CHRIS EVANS : Well I think every character has to come a little bit from you. One of the things I do as an actor is try to adjust who I’m speaking to. I do believe there’s always something that you can tap into for every role because you have to make it your own. You can’t be too foreign off base because, you have to make it something familiar.

I grew up with a kid named Charlie Morris and you can all right that down because he’ll love it. This was a kid who was an Eagle Scout. You know what it takes to be an Eagle Scout as a kid? He was just the best guy I knew, just a good guy. And so a lot of times you kind of draw parallels to what Charlie would do but the trickiest thing is to try to make him likable. He doesn’t joke, he’s not fun. He’s not like sassy or loud or anything. So you try to play this guy and not come across as boring, which is the most dangerous thing about the character.

It’s fun because it’s not me. I’m a very open guy. I wear my emotions right on my sleeve and this guy is a little more inside himself. But that’s what makes it like a fun challenge. Like I said, you do draw on parts of yourself. But I also lean on Charlie quite a bit, too. He’s a good guy. Just a good guy. He just does what’s right. END_OF_DOCUMENT_TOKEN_TO_BE_REPLACED

I personally think that the kids would love seeing both Star Lord and Captain America show up together with Tom Brady. How amazing would that be?

I watched the game through updates from friends on Facebook and Twitter as well as some of the streaming services that my co-workers were running. I guess I missed a pretty exciting game, glad that the Patriots won. Eva is going to be so excited tomorrow morning when she finds out.