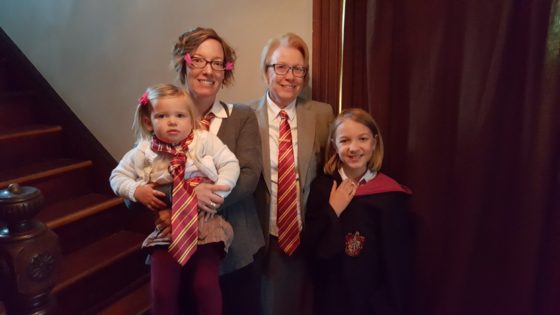 Today was Eva’s birthday party. It was a Harry Potter themed party. Allison did a great job with the party. She made floating candles, wands for the kids to paint and a sorting hat ceremony. The kids also watched part of Harry Potter and the Sorcerer’s Stone.

Eva was so excited about everything all day. She showed such enthusiasm for everything. Her friends and family gave her some great gifts and many were Harry Potter themed. She just loves the series so much and reading the books is one of her favorite things to do. I know that she’s excited to wear her Hermione Granger costume again for Halloween.

After the party we got some pizza and watched the rest of Harry Potter. I was able to take two hours off from work and go in later so I could spend a little extra time at home with the family. Then it was time for showers and baths for the kids and I went to my office and opened up one of the TWO Marvel Collector Corps Doctor Strange boxes. for some strange reason I had two boxes sent to me. The weird thing is that the order numbers are sequential but when I go to my account there is only the one order for one of those order numbers. I tried looking up the other order number but I could not. I have no idea how that happened. So, I unboxed the one box and inside there were some great items. There was a Doctor Strange mug, tshirt, exclusive comic book cover and an exclusive Funko Pop of Doctor strange in his astral form levitating so the cloak of levitation is what is actually holding him up. It is a really great pop, although I think I would have preferred the Blue of the comic than the yellow of the movie for the Pop!. There was also a Doctor Strange Patch and an eye of Agamotto pin in the box. It was a pretty decent box, too. I now have most of the Doctor Strange related Pops that have been released. 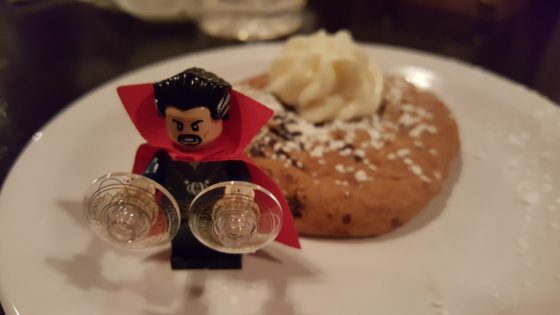 I flew out to California today for a couple of days interviewing people for various media events. I’m here to screen the movie Doctor Strange and interview some of the cast. I’m also going to learn master Pumpkin Carving Techniques to celebrate the release of Finding Dory on Bluray. I’ll help the Bachelor look for love when I interview Ben and Lauren from “Ben & Lauren: Happily Ever After?”. I’m also going to learn about giant robots with Mech X4, a new show on Disney XD.

While here I was able to catch up with Mike Schmidt of The 40 Year Old Boy podcast. We hung out for a while and talked. I was about to find a few fun toys at Hot Topic. I found the Ahsoka Tano exclusive Pop figure and also the Doctor Strange and Kaecilius ones. For tonight;s activities we went to the Saddle Ranch Chop House for some tasty food and fun watching people ride the Mechanical Bull. I did not ride it. However, Melissa of The-Mommyhood-Chronicles.com did and I captured it on today’s vlog.