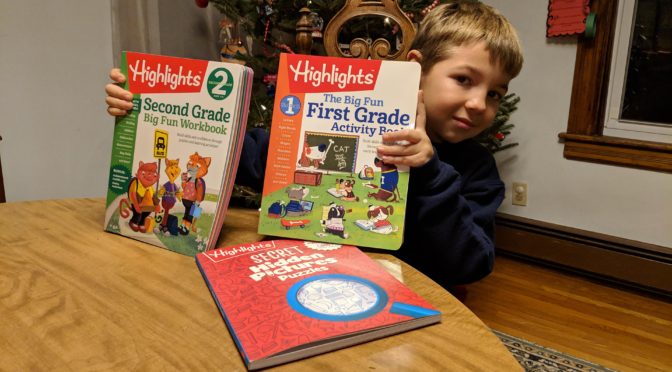 When I was growing up my Aunt Cindy bought me a subscription to Highlights™ Magazine. I loved that magazine for all the fun stories inside and also the Hidden Pictures®. There was also Goofus and Gallant, two kids who taught us about manners and more. Every time I was at a doctor’s office or dentist there was Highlights™ Magazine. It was everywhere and I enjoyed it very much. Now Highlights™ has branched out into educational workbooks for kids as well as a giant book of Secret Hidden Pictures® Puzzles. I was sent some of these for free to review with Andrew. This is what we thought.

We received the Highlights™ Big Fun Workbooks for First and Second Grades. Andrew is in First but he loves doing workbooks and he is quite smart so I figured that he could do the Second Grade level work. He can. He likes to be challenged and to figure things out. These workbooks have so many different parts to them and they are filled with the humor and wonder that Highlights™ has always been known for. I feel confident that Andrew is adding to his knowledge by using these workbooks. Here is more about the workbooks from the official Highlights™ description. END_OF_DOCUMENT_TOKEN_TO_BE_REPLACED

As a Member of the Netflix #StreamTeam I am provided with free Netflix and additional compensation. Opinions about Netflix are my own. Each month I write something new about Netflix and this month I am talking about how Netflix lets you enjoy your entertainment on your own schedule.

Personally, I am no stranger crazy schedules. I work weekend nights from 7pm to 7am and during that time I have been known to stream a show or two while working on projects. There are so many options for shows to watch. This past weekend I discovered the show Riverdale. All 13 episodes of first season are on Netflix. They were riveting and I couldn’t look away. As I worked on some mundane stuff the antics of Betty, Veronica, Jughead and Archie played in the background.

I’m always looking for something new to watch. It can be Master of None or The Unbreakable Kimmie Schmidt at 3am for some laughs to keep the night going. It can also be The Last Kingdom, Sense 8 or Longmire during my break because those are shows I really want to be able to focus on. Then during the week we’re watching Phineas and Ferb, Fuller House, Dinotrux, Inspector Gadget (Season 3 back 6/2), Masha’s Spooky Stories and whatever else Andrew discovers. If Allison and I get some time to ourselves we watch shows like Bloodline (the Final Season was released 5/26) and Orange is the New Black (which returns for Season 5 on June 9th). Eventually I’m going to start watching House of Cards which returns for Season 5 on May 30th. That will give me weekend break time viewing for weeks. END_OF_DOCUMENT_TOKEN_TO_BE_REPLACED