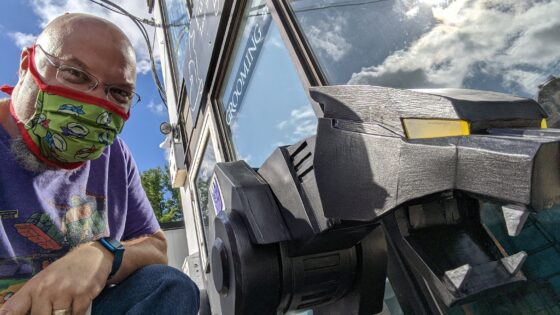 As with all things 2020, Free Comic Book Day was a little different this year. It wasn’t just the cosplayers wearing masks. This year everyone was wearing masks and keeping things distanced. Free Comic Book Day was also moved from May to September because of the pandemic and also because it made more sense for people to pick up all of the free books than just a few each week. The books were released each week but doing a big event is something much more fun. I like how Wild Time Comics did the day. They had things spread out so that you weren’t on top of everyone and the books were all outside so they were easy to pick up. There were some cosplayers there on hand for taking photos.

I was leaving and I noticed a statue of Ravage from The Transformers over by the building. I talked with the guy who built it and then took today’s photo with the prop. He did an amazing job on it. He even took it to a Transformers convention where there was a cosplayer dressed as Soundwave and she ended up spending a lot of time with this prop and taking photos with people.

I picked up 5 of the free comics. X-Men and a Spider-Man comics for me. Loud House, Invest-A-Gators and Usagi Yojimbo for the kids. Andy read the Loud House comic three times. He also read them in his underwear because that is how the main character of The Loud House likes to read his comics. I hope that we can all go back to the event together next year. 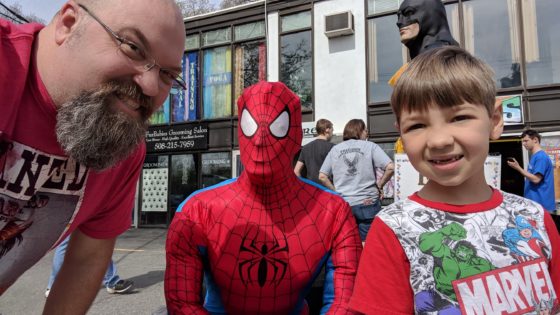 Each year we make a visit to Wild Time Comics for Free Comic Book Day. The tradition started with Eva years ago, but she was at Normandy Farms with her cousin Amanda. She has really been loving riding her bike lately and so proud of herself for having the training wheels removed.

this year it was Andrew and I attending the event. Eva did ask that I be on the lookout for something about the X-Men. She seems to be interested in that series, especially X-Men Evolution. We got 6 issues of that last year and she wanted more like that. I found a compilation of many essential X-Men stories and picked that up for her. It was nice because Andrew spun the wheel and got a 40% off coupon for our purchases for the day. It was pretty busy there but we were one of the first people in the door. I always try to arrive early because of work. This year I did not have to go into work on Saturday night so we hung around a little while longer than usual.We picked up some fun free books and then got some photos with folks dressed up. 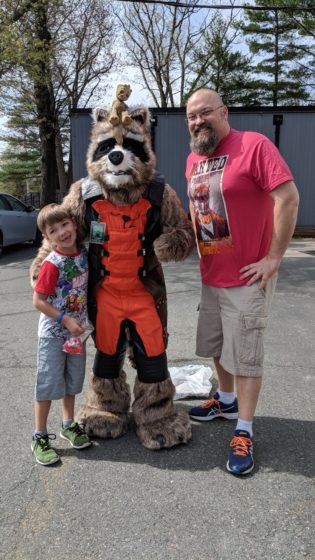 Andrew was excited because Rocket and Groot were there. We had a great time at the event and look forward to going again next year.