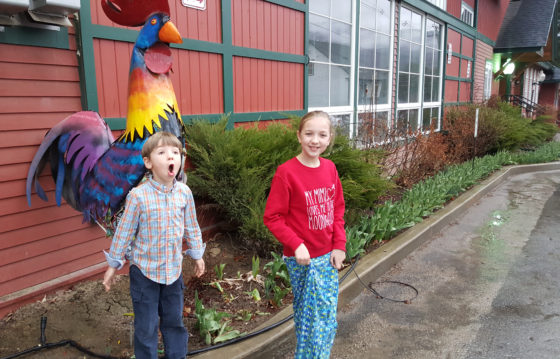 Our third day on vacation and we are enjoying our time at Pollard Brook. Today we spent some time in the room and then the pool and later an adventure out for dinner. We started off the day with a very special activity. Back in 1999 LEGO started producing Star Wars sets. At the time I was working as a Residence Hall Director at Saint Anselm College. I also had a full time job. I had no girlfriend and no extra expenses. I had some disposable income and I went LEGO crazy. I also bought a lot of comics and Transformers. I bought the LEGO Star Wars sets with the specific intention that when the children, that I hoped I would someday have, were old enough to enjoy Star Wars that we would build these sets together. Andrew and Eva are both fans of Star Wars and are both old enough to build LEGO sets so it was finally time.

I packed the Star Wars LEGO set 7140 – X-Wing Fighter to be the very first one that we would make together. I also downloaded Star Wars: A New Hope onto my phone and was able to play it through the Chromecast on the TV, not without a lot of finagling, this thing does not seem to work right every time, nor does it work the same way every time. We watched Star Wars while building the X-Wing Fighter and had a great time doing it. We organize all the bricks by color and then take turns, by page to build the sets.

Eva did some more Stop Motion Animation and had me upload her three movies to YouTube. You can find her 1st Try (with my help), 2nd Try (all Eva) and 3rd Try (All Eva) on YouTube. She is very proud of them and each video represents a couple of hours work using Modibot and Stopmotion Explosion.

We had a simple lunch in the room and then went over to the pool. The kids love hitting the pool. We also used the Jacuzzi and it turned much colder today than yesterday, so that may not have been the best move. Then it was time for cleaning up.

We opted for an early dinner over at The Woodstock Inn and Brewery. There we shared an Onion Blossom. Allison tried a sampler flight of beers and you have to watch the video just to hear Andrew tell her to “chug, chug, chug!” Neither of us knows where that came from. Allison and I shared a Fisherman’s Platter. Eva had chicken wings and Andrew had a huge hot dog and mac and cheese.

Ten we headed back to the Pollard Brook Resort where there was an activity happening. The kids made some bath fizzies. Eva made some peppermint ones and Andrew some sage ones. I stepped in to help him out because he wasn’t quite getting the concept of how to mix up the bath fizzies. Things were flying out of his bowl.

We went back to the room and the kids played while I got ready for a Twitter Party. I try not to have to do too much work while on vacation but occasionally I am working on things so it cannot be helped. It was only a short party so it did not interfere with spending time with everyone.