Back when Skylanders Swap Force came out there was a promotion with Toys R Us. If you spent $100 on Skylanders merchandise with your Toys R Us membership rewards number you’d get this figure free.

Gill Grunt is one of my favorite characters. Ever since the first series Gill was the character that I enjoyed most. He’s entertaining and has some cool weapons. I especially like his giant anchor attack and his ability to travel around on a jet of water spraying from his backpack.

It is too bad that he doesn’t look that way in the game. 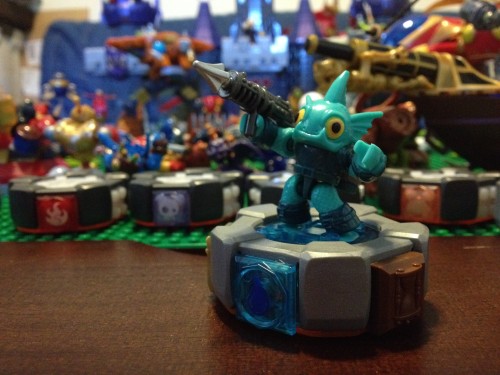 I was sent the MEGA Bloks Skylanders Giants Gill Grunt Battle Portal to play with and review. Opinions are, as always, 100% my own.

Gill Grunt has been one of my favorite figures and playable characters in the Skylanders series of games. I even made sure to get a few of the very special editions of the character. So, when Gill was released on his own battle portal I was excited.

The set comes with a battle bumper, elemental symbol, hourglass piece and key piece. The enemy contained in the set is a fire imp. This is the first instance of a fire imp in a set and it is a nice alternative to another Chompy. Although, Chompies are very prevalent in the Skylanders games.

The Gill figure itself is very well done. He looks great and has excellent accessories like his harpoon gun and his water tanks that let him propel himself around or shoot massive streams of water at enemies. Gill moves at the shoulders, his hands turn, his feet and legs also move. I’m glad to finally have him in my collection of Skylanders MEGA Bloks figures.