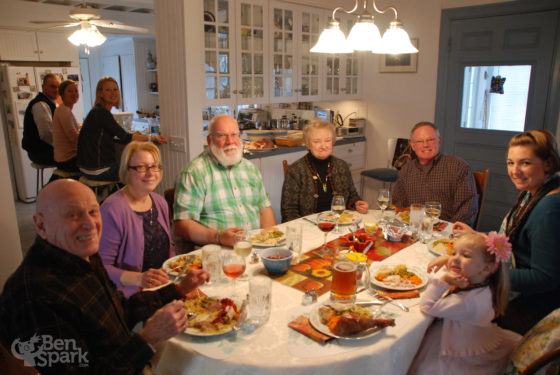 Had a really nice Thanksgiving on the Cape with family. Eva fascinated everyone with how much she knows and kept us all entertained. We had a terrific turkey and watched the Patriots win. What could be better? END_OF_DOCUMENT_TOKEN_TO_BE_REPLACED We figured that after Eva behaved so well all day during the funeral, luncheon and burial she deserved some Somerset Creamery Ice Cream. And frankly so did Allison and I.

Today was Grandma Theresa’s funeral. Yesterday was her wake. Since I have not blogged anything about the wake yet, let me say a few tings now.

We had Grandma’s wake at Dyer-Lake Funeral home. This funeral home is special to us because my father worked on so much of it over the years. You can see his perfect craftsmanship all about the place. And grandma was just like Eva’s movie hero Mary Poppins, practically perfect in every way. Tara relayed a story of her first knitted section of an afgan. She worked days on it and brought it to grandma for inspection. Grandma looked it over and handed it back to Tara, as a ball of yarn. She undid Tara’s entire work because it wasn’t of highest quality. Tara remembers that moment and how upset she as at the time but how it inspired her to work harder and focus on quality. She related that story to everyone in her eulogy of grandma.

So many of Grandma’s friends and family came to the wake, the stories told were wonderful, touching and many brought me to tears. She was my first grandparent to pass away, I was the eldest grandchild and there was a very special bond between us. Each time I approached the casket and knelt to pray I was overcome with emotion. Just talking about her to my uncles, grandfather aunt and mother got me all choked up.

The photos that I scanned on Sunday afternoon and edited Sunday night. They were made into two tributes. I submitted the 100 best photos to the funeral home and they were made into beautiful slideshow that played on a monitor at the front of the room. The funeral home added many of their touches which were moving and tasteful. Everyone thanked me for the slideshow. However, I did not create it, I merely submitted the photos. A good friend’s advice was, “take the compliment”. However, I have a hard time claiming ownership of work that is not mine. I would politely tell each person that I merely submitted the photos. Humility was another of Grandma’s gifts to me.

I had many, many more photos than just those 100 best. I gathered up the rest of the photos on Monday afternoon before the wake and I made them into a slideshow set to music. 1st I had the same song repeat 5 times, but I think if I had given that to grandma I’d have gotten back “a ball of yarn” for my imperfect work. So I added a bunch of other songs that Allison had picked for her mother’s group. I was rewarded greatly for my work there because the final words and shots in the slideshow meld perfectly in tone and meaning and ties it all together.

After the wake many people came back to my parent’s house for light sandwiches and desserts. I was able to talk to many people including my grandfather, who related a story that I added to my eulogy. I also talked to my other grandfather, my father’s father, our namesake. He has given many eulogies in his lifetime. His advice, if you find yourself overcome with emotion, breathe deeply through your nose and out slowly through your mouth as if you were whistling. It came in handy.

My morning started out with a meeting with my sister Tara to talk about the eulogy. We worked together so that my eulogy would transition well into hers. I went back to my computer and made many changes. I printed out the pages and we headed to the funeral home. We said our final goodbyes to Grandma. Allison and I served as pallbearers along with Erik, my cousins and my cousin’s father. We headed to Saint Joseph’s church in Attleboro, MA. This was the church where grandma grew up. A mere 2 minute drive would bring you to her childhood home.

The priest was very good, my Uncle Richard gave the first reading with my Mom, my Aunt Luann and my Uncle Jim standing with him. It was a beautiful reading too. Then Allison and my cousin Lindsay got up for the second reading. And at the end of the mass I stood up along with my sister Tara and we gave the eulogy. Mine appears below.

“Grandma Theresa was the ringmaster in the circus called family. Today we say goodbye to our beloved ringmaster. It will take each of us together to keep the clowns laughing, the lions tamed and the tightrope walkers on the straight and narrow. These were jobs that Grandma performed with ease and with love. In these past few days I’ve been privileged to see a concentrated glimpse into her life through photographs of her and her family. For my lifetime I’ve also been privileged to be her oldest grandson, eldest grandchild in fact. Through both experiences I’ve noticed three important qualities of Grandma Theresa, Love of Family and Friends, Humor and Generosity.

Family was so important to Grandma Theresa. You could see it in her eyes whether she was posing with her brothers Ernie and Pitu, that would be Ernest and Richard, in those beautiful black and white photos of hers. The ones that were carefully labeled with the names or nicknames of each family member in her perfect script. You could see it around her kitchen table.

At Grandma’s table she celebrated friends as family and family as friends. Everyone was welcome at her table. Not only in the metamorphic sense but her actual physical table. That table often overflowed with some of the most delicious meals of my life. Last night Tara, Shelby and I reminisced about that table from the house on South Main Street. We talked about how that table and the food on it was always so special. Shelby said that she remembered containers of cinnamon sugar for cinnamon toast in the double doored cabinet over by the infamous intercom. I got to push the button once or twice and call down to Grandpa or to Uncle Richard, however, no one could do it quite like Grandma. With enthusiasm Shelby said, “It was just cinnamon toast, but it was best at grandma’s house.” That was the consensus of so many people, whether the meals be cinnamon toast, or homemade chowder and clam cakes it didn’t matter, it was the best because it was at Grandma’s table.

Grandma’s table held such strong memories for me that when it came time, I asked her if I could have that table as I started my own family. It was the only thing I wanted because that table held such wonderful memories for me. It also holds the power to create a warm and welcome home where friends are treated as family and family are treated as friends.

And, I’m pretty sure the secret to that power is Lemon Pledge.

This brings me to humor. My wife is fond of saying that if you want to have a good time at a party stand close to my Dad. He has a subtle humor that is quiet and quick. I think that is why Dad and Grandma Theresa got along so well. They could sit back a bit, take in the whole scene, boil it down to the essentials, Remember that circus metaphor from earlier, It wasn’t too far off from the truth, and they would share a quip or two. I remember my grandmother’s laughter, she was always laughing about something or with someone. Even as she became sick she still retained her humor. Whether in a smile, roll of the eyes or some other look to let you know she was in on the joke. She was still enjoying the laughter.

My Grandmother was instrumental on introducing me to something that has been a part of my life since I was ten years old. Transformers. These toys were cars that turned into robots and had stories and personalities. Grandma gave me my first two transformers toys, WheelJack, the inventor who was a sports car and Optimus Prime the courageous leader a Mack truck and trailer. By introducing me to Transformers toys, Grandma tapped into a young boy’s imagination. I can still remember playing with those two toys for hours; planning and executing epic battles, car chases and daring rescues in the guest bedroom the Wareham house. As I got older I still love the world of the Transformers, a very technical world. I would later develop an interest in computers and creating with them. Grandma loved hearing what I was doing or seeing the things that I had created.

I mention the Wareham house because that is where my strongest memories of Grandma were made. The guest room had three beds, two regular size and one that was small that we called the Goldilocks bed. As with the table, the Goldilocks bed was also special. So special that it is now in Eva’s Memere’s house ready and waiting for her to transition from crib to bed. Which at her rate of development will be sooner than later.

I remember playing with my Transformers, trips to Bradlees to buy a Transformer or two, Swimming in Glen Charley Pond or catching little toads on the beach, â€œCut it!â€ (That was more a fishing with Grandpa Dick on his boat memory, but still that story made Grandma laugh and as we know she loved to laugh. Ask me later and I’ll tell you the story). Watching black and white movies, toys from the skinny closet, mushroom pizza from our favorite restaurant Charley’s in Buzzards Bay, Pretzel Sticks, and Crepes. Grandma Theresa made the most delicious crepes in the world, I can’t say enough about them, and my wife Allison wonders why most of my memories are food related.

Grandpa told me that he can remember scouring the Eastern Seaboard in the Buick looking for shopping malls on their trips back and forth from Florida. Grandma once saw a mall as they raced along at 60 miles per hour. Well, that was the speed they were at when they took the exit ramp. Searching for toys like Transformers for me and Cabbage Patch Kids for my sisters and cousins. She got just as much, if not more joy from watching us open those gifts as we did in receiving them. Her generosity came not only from the gifts she bought but the time she shared with each of us. My sister Tara will now speak more on Grandma Theresa, Thank you.”

After my eulogy Tara presented a very moving eulogy about her experiences with Grandma. It was wonderful.

After the funeral we went to Highland Country Club for some light sandwiches and desserts. There was a beautiful display of photos of grandma as well as the second slideshow. I made a DVD for each of my Uncles, my Aunt , my grandfather and my mother. This was the DVD that I finished on the night of the wake.

After the luncheon we headed to the National cemetery in Bourne, MA. There a priest said a few more words or comfort to the family. We said our goodbyes to each other and then Allison, Eva and I headed home, not before that quick side trip to Somerset Creamery. Grandma would have enjoyed that with us very much.