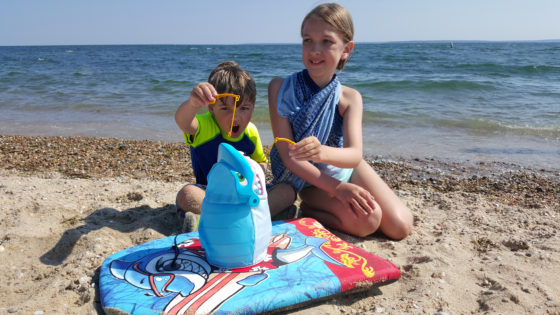 We received a new game from Goliath Games and Pressman Toy to play with and review. The opinions expressed are our own.

Shark Bite is a fun game where players take turns pulling fish out of the mouth of a shark. Play continues until the shark jumps up and chomps his teeth around the fish or the player fishing. I first played the game with Andrew. He and I played out on our front porch and had a great time anticipating who would cause the shark to jump up and bite.

Later on I took the game to the beach to take photos. We did not play there because I did not want to get any sand into the mechanism for the Shark. The kids wanted to play again later tonight and they convinced their auntie to play with them, too while I filmed. She was the one who caused the shark to jump in our video. Eva was scared of the shark jumping but she calmed down as they played. It was funny to watch, though. You can see everything in the video below.

Official Description:
Shark Bite: Get ready to have a REEL-y good time when you play Shark Bite! Players take turns rolling the die and fishing for the colorful sea creatures using the fishing rod. Watch out – you never know when the shark will bite!
(Players 2-4, Age 4+) 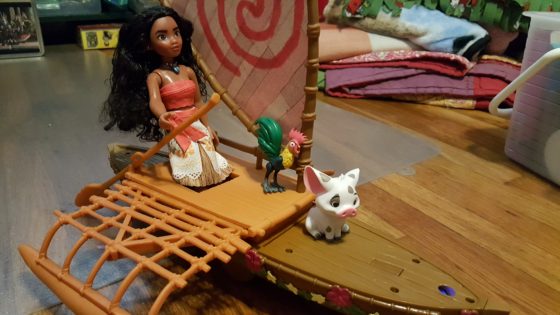 We recieved the Moana, Starlight Canoe & Friends to play with and review. Opinions are our own.

Eva helped me with this review by playing with the toy and telling me about it on the video below. We loved the movie Moana when we saw it as a family. There were so many great parts to it including the information about wayfinding. Wayfinding is the special way in which people from the Pacific Islands navigated the oceans. The canoe that Moana has in the movie and the other ones that she discoveres are very close to the look of a special canoe that is making its way around the world, the Hokulea. This double hulled canoe is being sailed by a group of peopel who have been learning the art of wayfinding before it is lost forever. It is so cool that a kids movie touches upon something that is so close to the heart of the Pacific Islands.

This is a pretty nice playset. The doll is an excellent one and looks great compared to her movie counterpart. The figures of Pua and Hei Hei are also done really well. Pua is the best of the bunch, he looks just like the character. The canoe is okay but the “gentle rocking motion” is not exactly that gentle. It rocks from side to side with a lot of extra motion. So much so that pua and Hei Hei fall off when you move it. Eva will talk more about it in the video.

Also, below the video is a clip from the movie Moana.