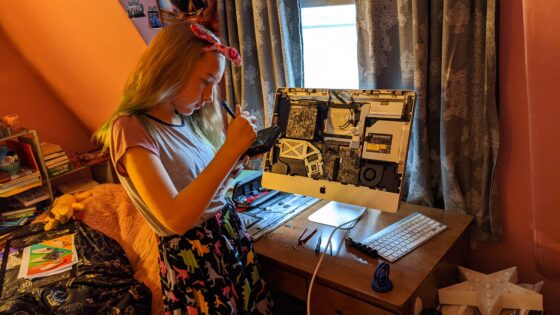 A few weeks back our iMac died. This was a 2011 model that we had purchased soon after moving in. It served us quite well until the hard drive failed terribly. I spent time with the Apple folks on the phone and we determined that the drive was bad. I could have it fixed at a computer store that worked with older models like ours. I could not just go to an Apple Store and have them replace the hard drive because the model is one they no longer work on. Luckily everything except for one file was backed up. Unfortunately that was my Quicken file where I had a meticulous grasp on our finances through the software. Paying to have that one file recovered was out of the question.

Paying to have the computer fixed was also a bit out there for me. I looked out the model and hard drive replacement online and found a kit and a new hard drive for under $100. I figured that for $100, if it doesn’t work I’m not out too much money. If it does work then I don’t need to replace the family computer.

So, I took the computer apart. Andy watched because he wanted to see “the guts” of the computer. I think he was disappointed because he was expecting it to be more like guts, who knows. When I asked Eva to check it out she was way more excited about it. I put the computer back together after installing the new drive. Still wouldn’t work right, now I was unable to reinstall the OS. I figured I’d take it apart one more time and try something else which I did on Monday and that also did not work. I’m out of options. Did a lot of research and testing but hit a wall over and over.

So… Eva has a computer to tinker with and explore. She’s free to disassemble the entire thing any way she wants. Who knows, she may even find a way to get it working again. I may even bring up the MUCH older PC that is in the basement and see if she wants to take that apart as well. That one should still work.

Today was the first snow that came down at the new house. Sure there was a dusting a couple of times but that snow melted before noon so it doesn’t quite count. But today I broke in the new shovel. I broke it in well. We have sidewalk on one whole side of the house and across the front. There was plenty to shovel. END_OF_DOCUMENT_TOKEN_TO_BE_REPLACED