Tickets have gone on sale for Rogue One: A Star Wars Story. I’ve seen a ton of my friends already purchasing their tickets to see Rogue One. I’m personally very excited for this movie but probably won’t see it until the week after opening. I work weekend nights and so catching it first won’t happen. So, during the Christmas Break Allison and I will try and catch the movie. We can plan now and get our tickets online. To celebrate ROGUE ONE: A STAR WARS STORY, several theater chains and ticket sellers are offering special promotions. Detailed information available here: http://www.starwars.com/news/rogue-one-a-star-wars-story-tickets-on-sale-worldwide

Additionally, to kick off ticket sales, a new TV spot is now available, featuring the chilling sounds of an iconic villain:

A special extended look at ROGUE ONE: A STAR WARS STORY is now available as well:

I’m getting even more and more excited about this. END_OF_DOCUMENT_TOKEN_TO_BE_REPLACED 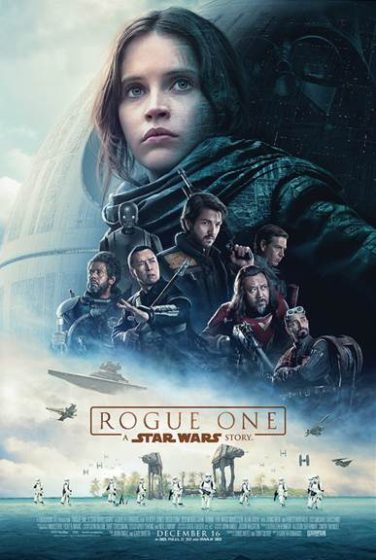 A brand new featurettte has dropped for ROGUE ONE: A STAR WARS STORY. This behinds the scenes look at the upcoming movie is incredible. There are lots of scenes showing the physical vehicles and practical effects of the movie as it is being made. I hadn’t realized just how excited I was to see this movie. Take a look for yourself.

From Lucasfilm comes the first of the Star Wars standalone films, “Rogue One: A Star Wars Story,” an all-new epic adventure. In a time of conflict, a group of unlikely heroes band together on a mission to steal the plans to the Death Star, the Empire’s ultimate weapon of destruction. This key event in the Star Wars timeline brings together ordinary people who choose to do extraordinary things, and in doing so, become part of something greater than themselves.

ROGUE ONE: A STAR WARS STORY arrives in theaters everywhere on December 16th In RealD 3D and IMAX 3D!