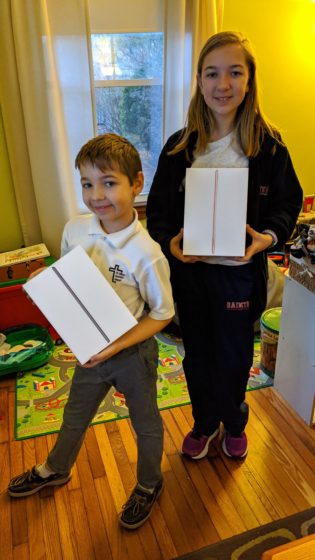 Since before Christmas Andrew has been asking for a new iPad. He had our oldest one and it has served him well. He had some birthday money and gift cards to use to buy it himself. He must have learned about the Apple pencil at some point because he began to ask about it and he wanted one. I got one when I got my last iPad. I hardly ever used it but then again I don’t use my iPad for that much other than entertainment. The kids are much more creative on theirs. To that end they each bought their own iPads that are compatible with the Apple Pencil. The tough thing is that you have to re-pair it with each iPad when you want to use it. So, when the kids take turns using the iPad and Apple Pencil they have to go back through pairing the pencil. It isn’t that big a deal but I figure that at some point the kids will want one for each of them.

Eva also bought her own new iPad using birthday and Christmas money. They are very excited about their new tech.

I enjoy seeing what they create using the pencil. They use a program called Recolor and I just got them the Moleskin program called Flow. It is open ended and gives the kids so many tools to create their own art. I am looking forward to what they are going to create.

Seeing as tonight is the last night of work before Halloween I opted to dress up a bit with my Optimus Prime Voice Changing helmet. However, when I went to use it the batteries were dead. So I went on a quest to change them. I had thrown out the directions years ago. I usually do. So I started looking around for the right spot for the batteries and ended up taking the whole thing apart only to find them by following the wires. I was able to replace the batteries. Then I wore it to work and people got a kick out of it. It is a very heavy helmet though. Left dents in my head from wearing it too long.

Today I received my Apple Pencil. I got it for myself for Christmas. When Netflix sent me my #StreamTeam gift I looked into accessories for the iPad Pro and the Apple Pencil was one of them. I ordered the pencil and thought that it would be delivered in December so getting i today was awesome! I have yet to really work with it but from what I heard it is a pretty cool accessory for the iPad Pro. I can’t wait to use it.