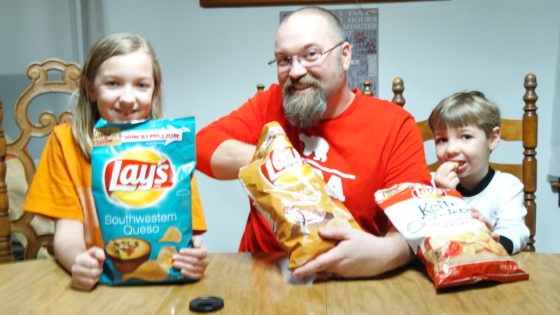 Today is National Potato Chip day and we celebrated by taste testing some new Lays flavors that are part of their #DoUsAFlavor promotion. Each year you can submit different flavors and the winning one gets a big time prize. Usually 4 flavors are created so that they can be tested and voted upon. I think these three were just made by Lays to promote the contest. 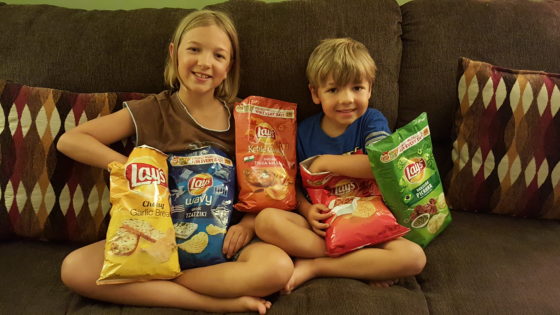 When we were on the Cape I went out to do some food shopping. I went to Shaw’s and saw that Lay’s had a whole bunch of new flavors. This was their Passport to Flavor series and there were four new flavors to try. I picked them up with the intention of doing a Blind Taste Test Chip Challenge. We finally got around to doing this today. Right before dinner Allison put all the chips into clear cups and made up a little chart of which were which. I actually got 5 flavors because I grabbed the 2013 Do us a Flavor winner, too.

We tried Cheesy Garlic Bread, Chinese Szechuan Chicken, Brazilian Picanha, Greek Tzatziki and Indian Tikka Masala. Eva did not like a couple of the chips. Andrew never met a chip he didn’t like so he was all about eating all the chips.

I recently purchased Adobe Premiere Elements to try and up my video game. Today’s video ended up a little wonky on the program. My biggest problem is the audio not lining up with the video. I am able to tweak it on the program better. However, I watched the video on my phone again and the audio and video were working correctly. So I uploaded both to see which one came out better.

the video straight out of the phone came out better. The audio was completely synced up, so I am not sure what exactly happened with the one that I put on the Mac. I’ve got to figure this out so I can start making better videos.