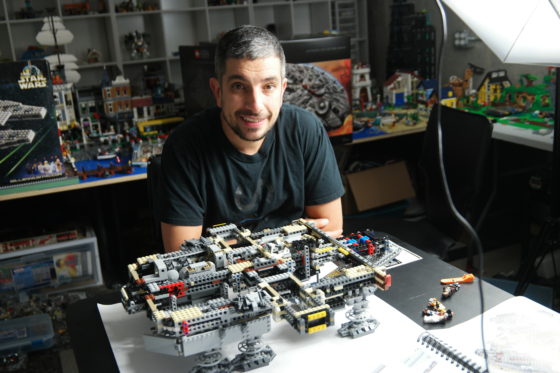 Today was a day that I’ve been waiting for! Today was the day that the Star Wars Millennium Falcon was released in stores and this was the largest most expensive LEGO set ever. And I didn’t even have to buy it. No, I did not get it for free. My friend and co-host of Built from Bricks, Brian bought it because this was something that his son CJ had always wanted and he is building it as a tribute to his son. He let me build a little, too.

This was a very hard set to get because only so many of them would be released in stores. Brian was up at 4am to get over to the Providence Place Mall to be first in line to pick up the set. His plans were to Livestream the build all day and there was no way that he was going to miss getting this set. Luckily he got there first and was able to secure the very first one sold at the store that day.

This is a Massive Box. It was so massive that a handle was added to it as well as wheels so that people could carry it out of the store.

Now, Brian was at the store for many hours waiting to get the first set. I showed up with 15 minutes to go before the doors opened to capture the purchase on Facebook Live. You casn see that and our other livestream videos below. END_OF_DOCUMENT_TOKEN_TO_BE_REPLACED