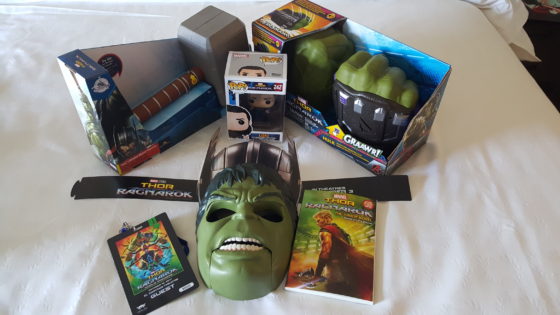 On October 9 – 11 I attended a Disney Press Event for THOR: RAGNAROK. My hotel and airfare and meals were taken care of while I was in L.A. Opinions and observations as well as recaps and such are all my own. This post will also contain some affiliate links to Amazon.com.

Today is the release date for Thor: Ragnarok and I’ve written a ton of posts about the movie from Interviews with cast members Karl Urban and Rachel House (Coming Monday) to Marvel Studios President, Kevin Feige and Thor: Ragnarok Director, Taika Waititi. I’ve also written about the incredible time I had on the red carpet for Thor: Ragnarok and also my Spoiler Free Thor: Ragnarok review. We all received some fun toys at the event including some Hulk Hands, Hulk Mask, Thor’s Hammer, a Funko Pop and a Thor Junior Novel. When I brought these home Andrew was thrilled with the Hulk hands and the two of us had a fun time play fighting with the hammer and the hulk hands.

END_OF_DOCUMENT_TOKEN_TO_BE_REPLACED 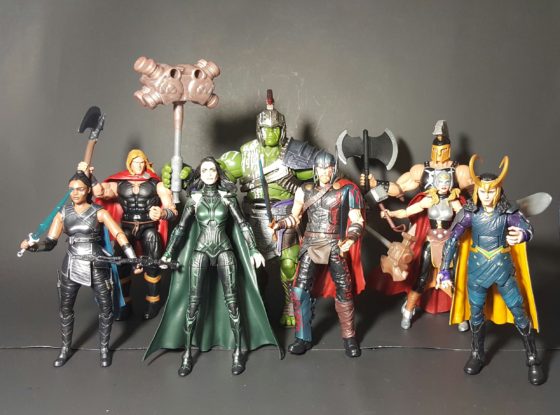 I received three Thor: Ragnarok Marvel Legends Build-A-Figure figures from Hasbro to play with and review. The opinions are are my own. I also bought five additional figures.

The Marvel Legends Build-A-Figure series are some really well done figures. There are six figures in the series, Thor, Loki, Hela, Thor (Jane Foster), Odinson and Ares. These six figures each have a piece of Hulk. There are two other figures in a two-pack. They are Marvel Legends size but do not include parts of another figure. For the most part I liked the choices on characters but I think that they could have included Skurge, Heimdall and Korg instead. Those would have been better figures to include. Thor (Jane Foster), Odinson and Ares are from The Mighty Thor comic series and there are cool in their own right, but why not split them into another series?

Today I unboxed all the figures in a livestream today and it was fun. The Hulk figure is huge and amazing. It has full armor from the movie and also the two weapons that he uses. You can remove much of the armor, too, in order to make him look more like he does in the rest of the movie.

Each character has lots of articulation and so many ways to pose. The detail is incredible, especially on the faces of Hela and Thor. Thor looks so much like Chris Hemsworth. Hela looks like Cate Blanchett and Loki looks a lot like Tom Hiddleston, but Tom and Loki for that matter look far less greasy. Hulk looks like Hulk. The comic book based character like Thor (Jane Foster), Odinson and Ares look like their comic book counterparts. I do really like how they all look. You can see what else I think about these and so many other Thor toys in the video below.