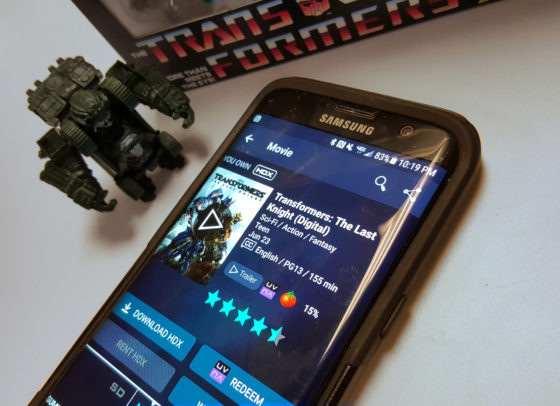 I received a download code for the digital release of Transformers: The Last Knight for free from Paramount. These are my honest opinions.When Transformers: The Last Knight came out I was one of the first to see it in the theaters. It was an absolute spectacle from beginning to end. It was completely action packed from beginning to end. This movie retcons the entire Transformers mythos including previous movies. The Transformers have been on Earth for many years and we start on the time of King Arthur where Merlin the magician gets a staff from a Transformers knight that sounds an awful lot like Megatron. Stanley Tucci does a fantastic job as Merlin, a fraud, a drunk and a bit crazy. The magic staff can control a dragon combiner that comes to the rescue of King Arthur and his knights.

I watched some of the behind the scenes extras for this movie and there was a Transformers writers room where 14 different writers came up with 14 different stories. There was a story of Transformers in the time of King Arthur. Another story talked about a coming of age story in World War II. It feels like every story has been mashed together into this 2 and 1/2 hour trailer for multiple movies. Many thing that happened in the past movies are glossed over and it appears that in the time since Transformers 4 many things have changed.

Transformers have become illegal all over the world except Cuba. All sorts of Transformers are crash landing on Earth all the time. Cade Yeager and the team from the last movie, the ones who saved everyone, are now hiding in a junkyard and are pursued like criminals. They rescue other Transformers when contact is made. There is a group called the TRF that hunts down the Transformers and they operate outside the military. Josh Duhamel returns as Colonel William Lennox who has infiltrated this group or is working with this group.

Cade receives a talisman from an ancient Transformer. How or why this Transformer has the talisman makes no sense and is not explained. Then we have characters like Barricade and Megatron back in the mix. I’m pretty sure that Optimus killed Barricade in the very first movie. I’m not sure if Megatron came back in the 4th movie or not but this is another thing that doesn’t seem to make much sense.

Then you have Optimus Prime. He has returned to Cybertron, although it seems like he was pulled there and didn’t actually get their under his own power. There he has a meeting with Quintessa the Prime of life. (huh?) Optimus tries to attack Quinetessa but she is way more powerful than he is. She slaps some sort of robot voodoo on Prime and he becomes evil. So, he comes back to Earth and tries to gain a staff that has the power to destroy Earth, I guess.

There are so many storylines to follow here and most of the robots get underutilized. Some new ones are introduced and thrown away almost immediately. The characters from Transformers 4 like Crosshairs, Hound and Drift are underutilized. They basically just hide in the junkyard with Cade. They also have Grimlock and some baby dinobots in the junkyard, too. Where are these guys from? Where are the rest of the dinobots? They disappeared at the end of the last movie. Grimlock is pretty much there for comic relief in that he eats a police cruiser and then doesn’t do much else.

There are some moments in the movie that are cool but then something shiny comes through and some words get said, then something nonsensical happens. I guess if you suspend all disbelief and dive into a large container of popcorn while enjoying tons of explosions and cool looking cars plus a Michael Bay love letter to the military then this is a movie for you. There is such attention to detail for so many parts of the movie except for the plot and story.

All this in the first 30 minutes of this two and a half hour movie. Watching the entire movie is exhausting but there are some amazing things to see.

If any one of those fourteen stories were fully developed they would be a pretty amazing movie. However, mashing them all together makes for an assault on both senses and your common sense. You just can’t try and figure it all out. So, turn off your brain, and strap in for a fun ride.

I’ll be attending HASCON on the Friday of the weekend-long conference. So, I will not be able to go to the special Transformers VIP Dinner on Saturday evening. This news about Mark Wahlberg attending has just been announced and it is pretty exciting. My friend Adam contacted me when he heard that Mark was attending. Adam told me that I definitely had to attend the event now. Here are the full details on that Dinner as well as a special panel on Saturday afternoon.

3:00 – 3:45pm – PANEL: TRANSFORMERS “THE LAST KNIGHT” in the Making
ABOUT: Discuss the making of Transformers: “The Last Knight” with producer Lorenzo di Bonaventura, Mark Wahlberg, and special guests.

ABOUT: Celebrate 10 years of Transformers film magic at this special VIP event! Join celebrities and producers, including Mark Wahlberg, Brian Goldner and Stephen Davis, from Transformers: The Last Knight as we look back at the magic moments from the franchise’s cinematic legacy. Peter Cullen and Frank Welker will give a special introduction to the first ever HASCON Transformers Hall of Fame ceremony, with a special appearance from past inductee Yoke-san, famed toy designer from TakaraTomy, along with a special guest. The Transformers design and brand teams will offer a sneak preview of select 2018 toys and this special evening will be capped off by an exclusive live performance from Stan Bush. Dinner will be served. Plus, participate in a raffle for special prizes including signed posters from Mark Wahlberg, Transformers merchandise, and more. Each VIP attendee will receive a special Transformers Super Fan gift bag including a pre-signed autograph from Peter and Frank, Special Comic reprints for HASCON, and a VIP HASCON-exclusive pin set.