So far I’ve been able to pick up pretty much every one of the Avengers: Age of Ultron Funko Pop figures. That is, at least until the release of Black Widow and Scarlet Witch. Still no word on Quicksilver. I’d also like to see Nick Fury and War Machine figures for this line. Also Falcon. Then I’ll have a real complete set.

Today was the official release day for Marvel’s Avengers:Age of Ultron to hit theaters. I’ll be seeing it again on Monday. I’m very excited to see this movie with Allison and Uncle Mike. Then I can finally talk about it around the house. I wrote a review of Avengers that is Spoiler-Free and then did an Avengers: Age of Ultron Dad.fm podcast with Adam Cohen of DadaRocks! that is Spoiler-FULL. We talk about everything Avengers and also delve into Marvel’s Agents of S.H.I.E.L.D. and the tie-in with the movie.

I have a downloadable Avengers: Age of Ultron memory game that you can download by clicking the image below. 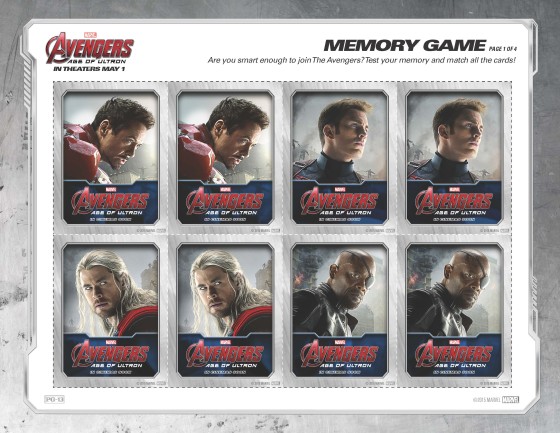 For my birthday/Christmas I signed up for two things, Marvel Collector Corps and Marvel Unlimited. These are two subscriptions that I paid for myself. Marvel Unlimited is a digital library of so many of the titles in the Marvel archives. I’ve been using that to read all of the titles involved in the Civil War event to get ready for the next Major Marvel movie, Captain America 3: Civil War. While it won’t mirror the comics as much as it possibly could it will probably draw some things from them. I want to have that in my brain as reference.

The Marvel Collector Corps is a subscription service program with Funko. They make all those fantastic Pop figures that I enjoy collecting. I’ll be posting a ton of photos of them this week leading up to Avengers: Age of Ultron. The only way that you could get the exclusive Hulkbuster Funko figure was to join the Collector Corps. A new box of great stuff will arrive every two months with the Avengers box being the first out of the gate. The box came with a patch, a pin, an Avengers comic with an Exclusive Cover, a T-shirt, an age of Ultron Dorbz figure and the 6 inch Age of Ultron Hulkbuster Pop figure. I really need a set of shelves in my office so that I can display all my Avengers, Guardians of the Galaxy, Big Hero 6 and Firefly Funko Pop figures properly.