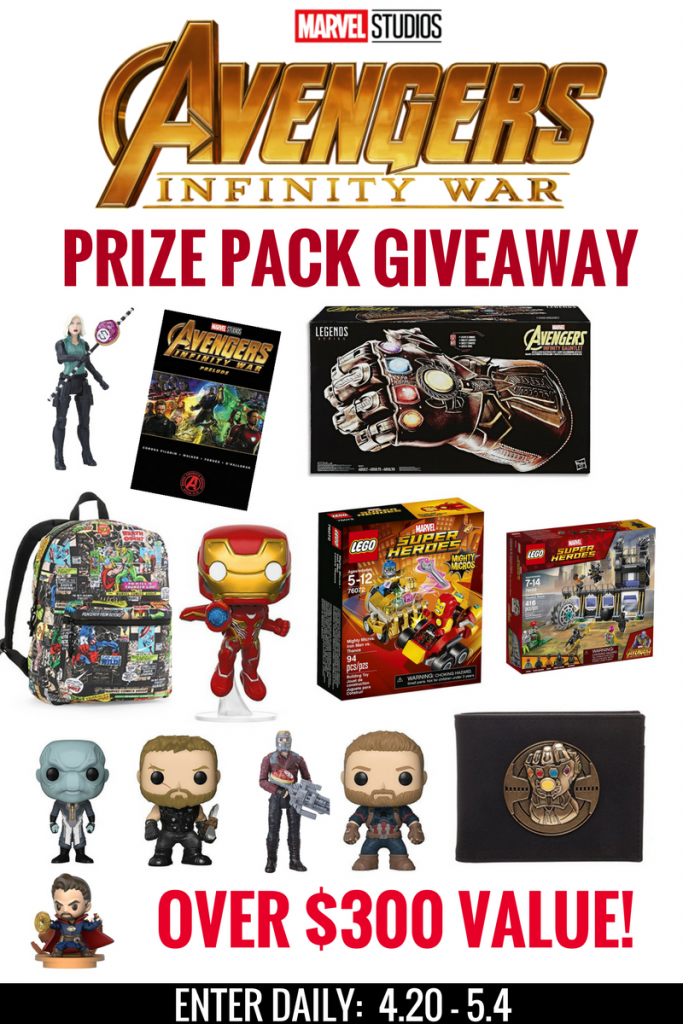 The biggest movie of 2018 has been built upon ten years of Marvel Cinematic Universe history. From the very first Iron Man movie everything has been leading to Infinity War and things will never be the same! During those years I had the unique privilege to not only see every single movie but to attend four of them in incredibly special ways. The first Marvel movie that I saw outside of the norm was the first Guardians of the Galaxy. This was the first time I was able to meet and interview the stars of a movie and also get special insight from the director of the movie. After that I was able to interview the casts of Avengers: Age of Ultron, Doctor Strange and Thor: Ragnarok. So, finally seeing all these characters together in one movie is a dream. I wanted to do something special and so I teamed up with the Hopping Bloggers to participate in their huge Avengers: Infinity War Giveaway. There are some great things in the prize pack and there are affiliate links out to Amazon.com that you can use to pick up anything you might need to celebrate this movie in your own way.

Products subject to change based upon availability.

Iron Man, Thor, the Hulk and the rest of the Avengers unite to battle their most powerful enemy yet — the evil Thanos. On a mission to collect all six Infinity Stones, Thanos plans to use the artifacts to inflict his twisted will on reality. The fate of the planet and existence itself has never been more uncertain as everything the Avengers have fought for has led up to this moment. Today was a nice day with Andrew. I took him to school and then went to the gym. From there I went back to shcool and played some Legend of Zelda: Breath of the Wild until it was time to go in to read to Andrew’s Class.

I read the class two books. The first was Different is Awesome by Ryan Haack and illustrated by my friend Wes Molebash. The kids liked that very much. The second book was Nanette’s Baguette by Mo Willems. The kids loved that story and they laughed like crazy. That book is a great one for laughter. Andrew said it was his favorite book.

We went to lunch at Bliss Bros. Dairy because I had a craving for clamcakes and chowder. Andrew was s so much fun at lunch. We are starting to have better conversations and he’s such a joy to take to a meal. He was funny and sweet. He impressed the waitress, too, with his speaking. She said to me that he spoke so well and then she asked him how old he was. He held up his hand. I looked at him and said, “She just said that you spoke well and then when she asked you a question you just help up your hand.” He pointed to his mouth. His mouth had been full and so he was actually being polite. Well, I’m glad he had the presence of mind to be polite in that moment.

We went to the playground right after that. Andrew played on his favorite things like the zipline and the swings. He took a couple of falls but got right back up to try it once again.

In my video I talk about the new Marvel Superheroes LEGO set that Brian and I built for an episode of Built from Bricks. The Hulk vs Hulk set is a great one. It is really fun to play with, too. You will see when the episode is released.