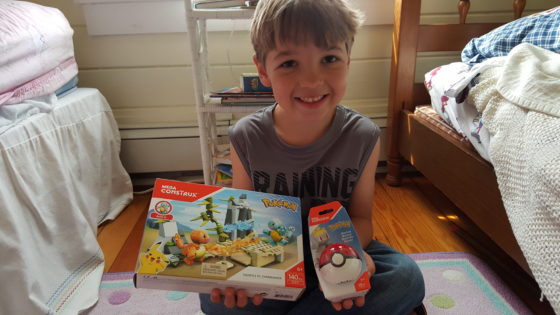 We received some Mega Construx sets for free to play with and review. Opinions are 100% our own.

We received two sets to play with and they were the Charmander vs. Squirtle battle pack and the Machop and pokeball set. Andrew and I don’t really know much about Pokémon. I was older when ti came out and I never got into it. I wasn’t interested in the TV show or collecting the cards either. I do like building sets, and so when we were asked to review these I said sure.

MEGA Construx does a nice job of creating sets that feature current characters and properties like Despicable Me and the Minions and now Pokémon. The way that you can build each little Pokémon character is done nicely. You actually build the little heads of the characters rather then them being molded pieces. I like this because the heads go on with ball in socket connections so that you can move the heads all around. This makes for better poses while playing. Andrew built these sets himself and he did a great job following the directions with a little help. You can see more about each of the sets and also find a link to their official pages. END_OF_DOCUMENT_TOKEN_TO_BE_REPLACED