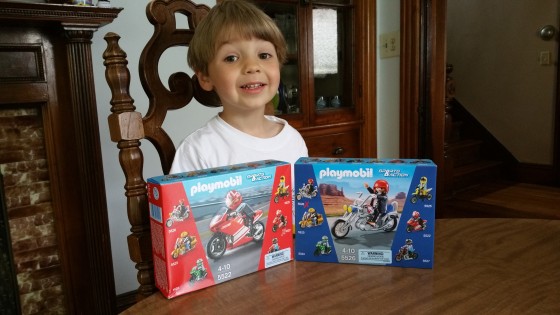 Recently we received six new Playmobil sets to play with and review. We received two Knights, two Fairy Princesses and two Motorcycles. Opinions of these sets are 100% my own.

When I was a little kid I had a few Playmobil figures. I had some soldiers with horses. They were some some frontier set. I enjoyed playing with them very much. My cousin had a Playmobil pirate ship and I really liked playing with that. The toys are just so simple and fun. They make for great unstructured play. You can create your own story with them. Eva is at the point where she is making up a narrative when she plays and Andrew is sort of getting to the point where he is making things up. He’s not at the point where he is creating his own stories like Eva is but he is coming along in his play. When he saw the box of toys he was very excited to start playing with the motorcycles. I had him pegged for the Superbike but he was all about the Eagle Cruiser. That chopper style cycle that looks very Easy Rider-esque. I had my eyes on that one but it was Andrew who claimed it and I got the Superbike. END_OF_DOCUMENT_TOKEN_TO_BE_REPLACED

I’m a big fan of the Spyder Can-Am Roadster. I was excited to see that Transformers put one of them out for the Movie line. I love how this bike looks and have wanted to road test one for some time. They even looked for super fans and bloggers a year or so ago. I wish I had known about it and would have certainly tried to go for that. END_OF_DOCUMENT_TOKEN_TO_BE_REPLACED