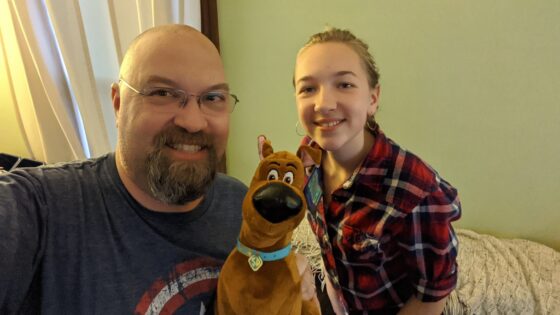 While this is not necessarily a post sponsored by Warner Bros. Pictures I did receive some product plus free digital access to the movie. However, I had just purchased the movie an hour prior to the email letting me know that I had the movie. So I gave that one to my sister. We’ve been very excited to see SCOOB. Andy has seen the commercials over and over and he could not wait for the movie. I do not think that he’s seen much about Scooby Doo. Not like me, I grew up watching Scooby Doo and all the cartoons that are mentioned in the movie. There were so many fun Easter Eggs in the movie. I know that I may have missed some or not known exactly why they were Easter Eggs but I caught many of them. Since Scooby Doo was produced by Hanna-Barbera there were many Easter Eggs from other Hanna-Barbera cartoons and I loved seeing that.

Scoob starts off telling the story of how Mystery, Inc formed, how Scooby and Shaggy became fast friends and their first cases. The story is set in modern times. I enjoyed how the move poked fun at things like the Mystery Machine being out of place. We even get an updated Blue Falcon played hilariously by Mark Walhberg. I was constantly looking on IMDB to check the cast list. Will Forte was teenage Shaggy and Frank Welker was Scooby. Roles made famous by Casey Kasem and Don Messick. Both of these now deceased actors did get Easter Eggs in the movie.

The movie was silly and funny and I hope that it did well. There were a ton of people tweeting about it including many celebrities. It felt like many people were watching. We received a Scooby Doo stuffed animal, seen above and a Mystery Machine Popcorn holder. We did not use that because we had a large dinner of Chinese food from our favorite Chinese restaurant. 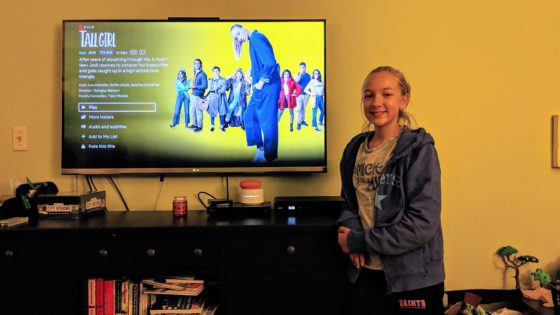 Tonight Andrew went to a Parent’s Night Out Event at the Karate studio. It was a Nerf War night and Andrew had a great time. So, with Andrew out of the house we had Eva alone for the night and we decided that we’d do a special movie night with her. It just so happened that a brand new movie came out on Netflix called Tall Girl and it was a perfect one for a special movie night with Eva. 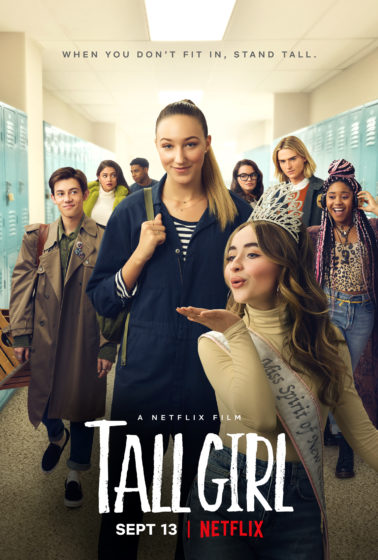 Tall Girl is a movie starring Ava Michelle as Jodi. Jodi is the tallest girl in school. This is something that she has been very uncomfortable with. At 16 she longs for something more normal. She is being teased relentlessly by the other students except for her two best friends Jack and Fareeda. She has a loving and supportive family including her father Richie (Steve Zahn and mother Helaine (Angela Kinsey) and her beauty queen older sister Harper (Sabrina Carpenter). Her father is over protective and worried about how tall she got so fast. He tries all sorts of things to help her fit in but they just make things worse. Eventually when a foreign exchange student, Stig (Luke Eisner) arrives things get interesting.

Jodi makes a connection with Stig. This does not sit well with her longtime lovesick friend Jack. He has been figuratively carrying a torch for her as long as he’s known her while literally carrying a milk crate. To add insult to injury Stig is staying with Jack as his exchange family. As Stig and Jodi get closer Jack attempts to drive them apart.

I think this was the one thing that didn’t totally sit well with me. Stig seemed like a genuinely nice guy and through Jack’s influence he gets lured by the seductiveness of popularity.

The main point of the movie was to accept and love yourself no matter what you look like. It is a fantastic movie for families and was a pretty wholesome movie. Eva thoroughly enjoyed it. The thing that I liked about it was the relationship between between Jodi and her dad. He tried so hard and was so scared about her happiness. I saw so much of myself in this character. When he finally “gets it” there is one incredible moment between father and daughter that I loved. I think it truly captured the parental struggle to stay connected as your children get older and begin to pull away or they suffer major disappointments. You have to check out this movie. The trailer is below.

Head to www.netflix.com/tallgirl to watch.