Whenever people debate over how to introduce Star Wars to their kids they talk bout the proper order for viewing the movies. The thing is, my kids haven’t seen any of the movies but they have seen every episode of Star Wars Rebels. I chose this cartoon as our jumping on point because of the character of Sabine. Sabine is a strong confident female character and I liked that about her and knew that Eva would be a big time fan. I personally had been awaiting the show ever since Toy Fair 2014 when I went to the Disney Consumer Products session. The show quickly became one of my favorites and I cannot wait for Season Two to start on June 20th. But that isn’t the big news of today.

The big news is that the characters of Kanan Jarrus, Ezra Bridger, Sabine Wren and Zeb Orrelios were announced to be figures in the upcoming Disney Infinity 3.0 game. There is not Play Set to go with these new characters however, the best thing I’ve heard so far about Disney Infinity 3.0 is that all the Star Wars characters can work in every one of the Star Wars Play Sets and there will be three of those. The Star Wars Rebels characters will be unlockable in the Play sets. So that means that Zeb can fight alongside Chewbacca or Kanan and Obi Wan can defend the Jedi order. END_OF_DOCUMENT_TOKEN_TO_BE_REPLACED 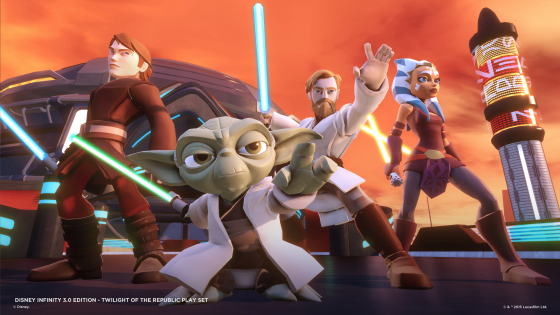 Today some new information and a ton of new screenshots were released for Disney Infinity 3.0. Specifically images for the Star Wars™: Twilight of the Republic Play Set. After the info below I have the different screenshots as well as images of five of the figures from that Play Set. Something really cool that I noticed from this press release, though is that “players will be able to unlock the ability for all Star Wars characters to play inside all of the Star Wars Play Sets“. That is something very significant. In prior versions of the Disney Infinity game, like 2.0 with the focus on Marvel Super Heroes only certain characters could cross over from Play Set to Play Set. In the Marvel universe there is a TON of crossover and they should have been able to work in all Play Sets. This is something I’ve wanted all along. It isn’t perfect, I still would like for every character to be able to play in every Play Set, but that isn’t going to happen so this news is really good for Star Wars fans like myself.

Through my Amazon Affiliate Link. 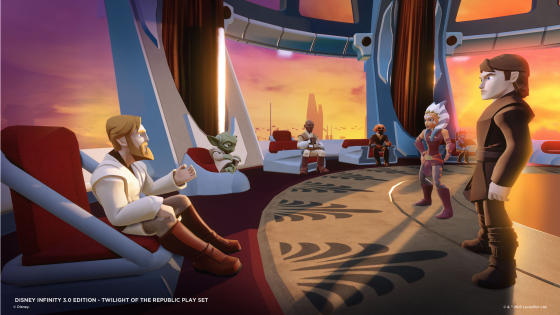 I wonder if the new Marvel Play Set for Disney Infinity 3.0 will let all the previous Marvel characters play in it? If that is the case then I’ll be so incredibly excited. I’d love it, too if there was some sort of Play Set for the random Disney characters from all versions, I love the structured part of the game more than the Toy Box part of the game, however, the enhanced Toy Box features of Disney Infinity 3.0 sound promising. Read more about the Star Wars™: Twilight of the Republic Play Set below. END_OF_DOCUMENT_TOKEN_TO_BE_REPLACED