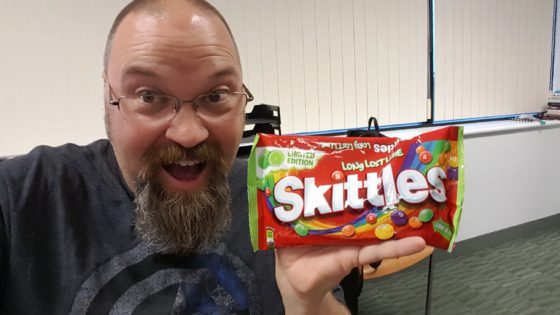 Sadly, I think way too much about candy. I remember certain candy from my youth and I miss it. When I was a kid I used to stuff Sunday newspapers at a candy store in the early morning along with my sister and sometimes my friends. We’d get paid in candy from that penny candy store. I can still remember it to this day and all of the tasty candy that I loved. I like tart and sour types of candy so I was a big fan of Sweet Tarts. Back then the green sweet tart was lime. There used to be a package of giant sweet tarts that were hard and not chewy. there also used to be Jolly Ranchers in sticks instead of the very small pieces that they have now. There also used to be lemon and pink lemonade jolly rancher sticks. My absolute favorite were Nerds and Rinky Dinks. Nerds are still around but Rinky Dinkys completely disappeared.

Rinky Dinks were made by Willy Wonka candies and there were two different boxes. There was a box with cherry, orange and lime and a box with grape, strawberry and lemon. They were about the size of tiny gobstoppers but they were tart and they had faces printed on them. The box separated each color and there was a flap with a hole in the box for each flavor so you could distribute only the colors you wanted. They were my most favorite candy ever.

Then there were Skittles. Skittles were created in 1974 but not widely made available in the US until 1982. These candies were really good because they also had my favorite flavors, Lemon, Orange, Grape, Strawberry and Lime. However, Lime was replaced by Green Apple. It seems as if so many companies have replaced the lime flavor with green apple and I was not happy about it. So, today when I found a bag of Skittles with the original Lime back I was quite happy.