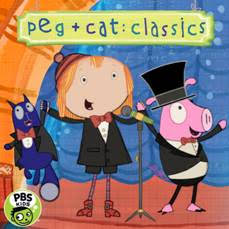 “Peg + Cat: Classics” includes expanded versions of songs that have appeared on the show since the first episode. Similar to PEG + CAT’s first album, which paid tribute to the Beatles, “Peg + Cat’s Classics” pays homage to the 3 Tenors. Starting today, “Peg + Cat: Classics” will be available for pre-order at a 50% discount on iTunes and Google Play. On Monday, March 2nd, it will be available on Amazon and Spotify as well. See below for a list of the tracks on this new album. Peg + Cat was just today announced the winner of the Kidscreen award for Best Music in a children’s television series – so now’s the time to take a listen!

Also, be sure to tune in on Monday for a week of new musical-themed episodes in “Peg Rocks!” Over the course of the week, Peg and everyone’s favorite sidekick Cat will visit Radio City Music Hall, join a girl group, and flash back to the groovy sixties, all while exploring math concepts for the preschool set. END_OF_DOCUMENT_TOKEN_TO_BE_REPLACED

With the new episode of ODD Squad Saves the World today there was also a release of a new app for ODD Squad. This one is pretty fun and follows something that happened on the show. A blob gets loose in ODD Squad headquarters and it is up to Olive and Otto to chase it down. In ODD Squad Blob Chase you take the role of an ODD Squad agent, like Eva has above. I guess we’ll have to call her agent O’Eva. Using Addition, Subtraction, Multiplication and Division you have to trap the escaped blobs. As the difficulty increases so does the way in which you use the tools to help capture the blobs. You also get different blobs to capture and they do different things. Some may reverse direction when they get to the edge whereas others will fall off the edge. You have to think ahead before you start taking away or putting up obstacles in the blob’s path.

We were provided with a download code to play the game and review it. I let Andrew, 3 years old, play with it first and he got the hang of it right away. He loves numbers. Eva also loves math and she had a great time playing as well. The game is geared for kids 5-8 so it is perfect for her to play. It is also good for Andrew to play and challenge himself. More about the game below. END_OF_DOCUMENT_TOKEN_TO_BE_REPLACED