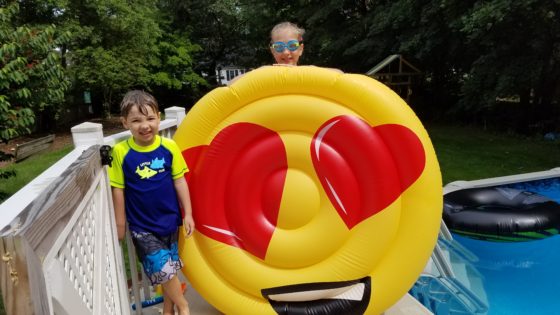 Today we went to my Aunt’s house to play in the pool for a couple of hours. The kids posed with a giant Emoji pool float for World Emoji Day. They also had a lot of fun jumping into the pool. Then we all went home to get cleaned up to go our for an Outdoor Movie night.

The theater group, Triboro Youth Theater, had a fundraiser where they showed Beauty and the Beast on a giant outdoor screen. It was my first time seeing the movie and I liked it very much. I had wanted to take the family to see the movie but never got the chance before they went and saw it on their own. Chalk it up to working weekends.

At the movie night there was a hot dog company called Gastros. They make their own hot dogs in Rhode Island and they were delicious. A bit pricey. It was an expensive night but tasted great!

MASTERPIECE on PBS, Playground and BBC to Co-produce three-hour mini-series based on American Classic “Little Women”
Beloved Louisa May Alcott Book to be Adapted by Celebrated Writer Heidi Thomas

Boston, MA: May 4, 2017— PBS and MASTERPIECE have announced they will team with Colin Callender’s Playground and the BBC for a television adaptation of Louisa May Alcott’s coming-of-age classic, Little Women. The three-part drama will be scripted by Heidi Thomas, well-known to PBS audiences for her acclaimed adaptations of Call the Midwife and Cranford. Vanessa Caswill (Thirteen, My Mad Fat Diary) will direct all three hours. Playground’s Golden Globe-winning adaptation of Wolf Hall aired on MASTERPIECE in 2015.

“There are only a handful of American books that have resonated with readers for as long as Little Women,” said Rebecca Eaton, MASTERPIECE executive producer. “To put this deeply moving story in the hands of a writer with the heart and depth of Heidi Thomas seems just right. And Colin Callender will oversee this production with the magic he brings to everything he touches, whether its Wolf Hall or the play Harry Potter and the Cursed Child, currently selling out in London.” MASTERPIECE is presented on PBS by WGBH Boston. END_OF_DOCUMENT_TOKEN_TO_BE_REPLACED