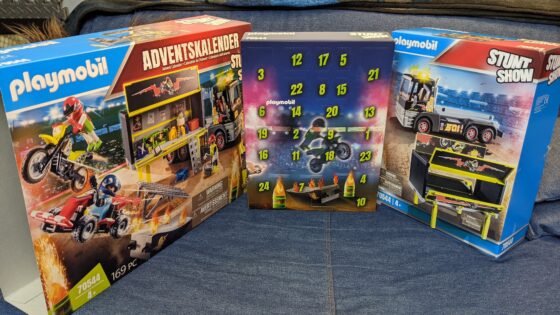 Playmobil provided us with a free review unit of their Jumbo Advent Calendar. Opinions are our own.

The kids love Advent calendars and are so excited to open them every year. This year Andy has a special Advent calendar from Playmobil. The Stunt Show Jumbo Advent Calendar is packed with great pieces, vehicles and figures to play with. The set arrives as one big box but as a parent I want Andy to have the full experience of the Advent Calendar and so I don’t want any of the days spoiled so I opened the set so that there were two boxes. One box contains the truck and trailer and the other box is the advent calendar itself. You see the larger box actually shows you the items that are inside and what days your child gets each item. I don’t want Andy to know that until he opens each day’s window.

You can see more about this awesome advent calendar in the video below and if you are looking to get one for youorself then you can do so through the Playmobil website at https://www.playmobil.us/jumbo-advent-calendar—stunt-show/70544.html. 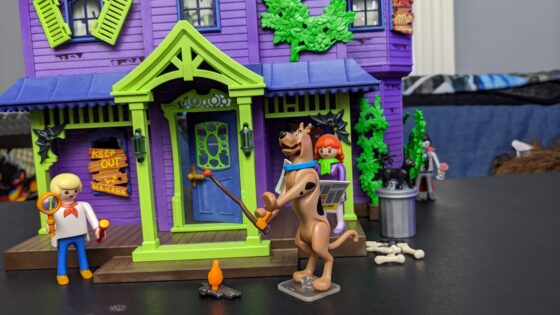 The fine folks at Playmobil sent me the Scooby-Doo! Adventure in the Mystery Mansion for free to play with and review. All opinions in the review are my own and honest.

I was a big fan of Scooby-Doo when I was growing up and I am glad that Scooby and the gang are seeing an uptick in interest from kids all over. Playmobil has done some great things with the Scooby-Doo brand. They came out with the Mystery machine first as well as some blind bag packaged ghosts from the show. These are really well done. Also well done was the Mystery Mansion This ting has everything that you need for having some fun play with the Scooby gang. that is everything except for Shaggy and Velma. I honestly think they should have been included in the set. There does not appear to be one set where you have the whole gang together. The best way to get the entire gang would be to get the Mystery Machine with Fred Daphne and Velma and the set with Scooby Doo, shaggy and a ghost. That would get you the whole gang. Then you could have the entire gang go through the Mystery Mansion. Not having Velma and Shaggy aside, the set is a phenomenal one. You can see what I thought of it in the video below.

There are many play features in this set. The sliding Staircase, trap doors and secret passages. I also like the integration of the Playmobil app that allows you to show ghosts on a special plastic screen. The Dracula’s coffin that has several sounds and a flashing light is also good for setting the mood. For some reason Andy brought it outside the other night while we were watching a movie and I told him to bring it back in the house. He used the sound that Scooby and Shaggy make when running away in the most perfectly timed way.

The set is now a nw Halloween decoration addition to the house.