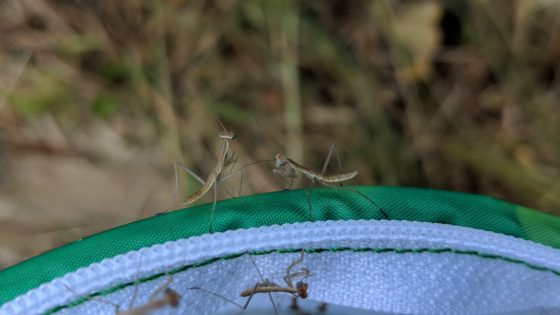 A few months ago I decided that I’d pick up a Praying Mantis Kit so that we could hatch some Praying Mantis Nymphs for the kids to observe. The kit was from Insect Lore and they actually sell a bunch of different insect kits like butterflies and lady bugs. They even have some kits themed on The Grouchy Ladybug and The Very Hungry Caterpillar by Eric Carle.

I had just gotten home from work and had gotten into bed. Andrew came busting in to tell me that the Praying Mantis egg had hatched. I got dressed and went back downstairs to see the cage with a ton of them all crawling around. You have to release them right away because they will eat each other. You can try and keep 3 or 4 of them but you have to get them live bugs to eat. So, we opted to release them all in the back garden. Andrew was excited. Allison and Eva, not so much. I just hope that some stick around so I can photograph them when they get larger.

This Praying Mantis hitched a ride with my Dad around town. The praying mantis here lives in one of the arborvitaes in our yard and today Dad was working in the yard and the praying mantis must have hitched a ride on him and then onto his Truck because as Dad drove around town he noticed that the very large mantis was clinging to the windshield. So, when I came home they showed me right away so I could get this photo.