I review a bunch of iPad apps and from time to time the ones that I review go on sale and I’m alerted to that to let you know that you can pick them up for good prices. Two such apps are the Avengers Origins: Assemble! and Avengers Origins: Hulk. These are normally $3.99 – $5.99 each but until Sunday July 8th they are only $1.99 and the cool thing about them is that they are narrated by Stan “The Man” Lee. Click the titles to see my reviews for these apps.

The “Assemble” story is the perfect introduction to exciting Super Heroes like Iron Man, Captain America, Thor, Hulk, and more. The app features innovative, interactive activities including matching heroic accessories with each Super Hero, using Thor’s powers and the Hulk’s strength to stop the Atlanteans and Namor, melting the ice to free Captain America from his frozen prison and playing an action-packed 3D third-person-view mini-game! Available for iPad, iPhone and iPod touch.

If your kids are a little younger but are using the iPad then I have a cute alphabet app for you. It is called ABC Fireworks App. Young children, pre-school age can tap letters as they are fired into the sky. As your child taps the letter it explodes in a flash of color like a firework. There are a few different firework designs and so many colors. Eva already knows her alphabet very well but she was fully engrossed and entertained by this app. When we originally reviewed this together we had some suggestions for the app developer and he was very receptive to our suggestions and even made some changes based on those suggestions. I love it when an app developer takes into consideration the suggestions from users. I think the app has become vastly improved with the changes and now the app is only $0.99 in the app store. That special price is good till Saturday the 7th.

Disclosure: I have received copies of each of these apps for free. Opinions about them are 100% my own. 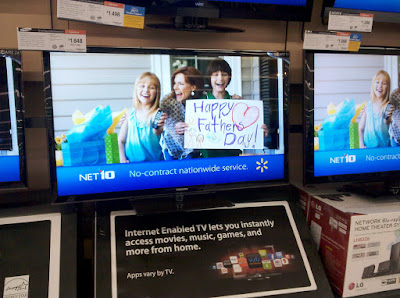 I was asked to go to Walmart and check out what they had for electronics for Father’s Day. Before I went there I took a look at the site the Walmart Father’s Day electronics page. I wanted to see what might be on sale and get some ideas on what I might want to add to my own Father’s Day wish list.

I don’t really have a Father’s Day wish list. Let me rephrase that. We’re on a budget and buying a house so I don’t have a formal Father’s Day wish list but there are some things that I’d really like if we weren’t on a budget or buying a house and every penny is going towards all things house related. Although…. END_OF_DOCUMENT_TOKEN_TO_BE_REPLACED