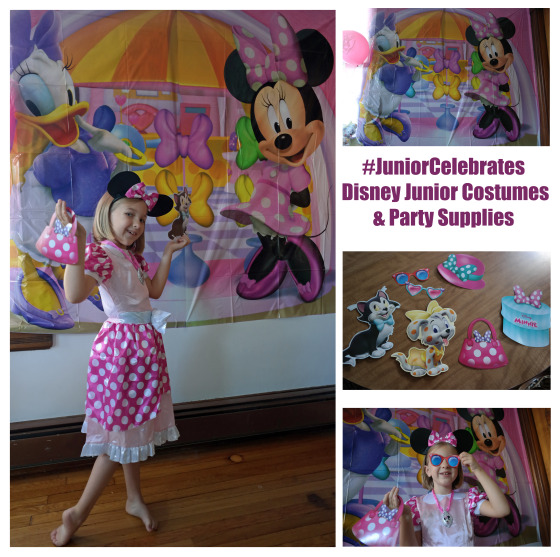 My kids love to play dress up. It started with my daughter and has now moved on to my son. Eva has a large box at the foot of her bed with tons of dress up clothes. They are a mixture of old Halloween Costume and costumes we bought after Halloween for dress up purposes. Because of that she can dress up as any character that she desires when the mood strikes. One character that she really likes is Minnie Mouse. She was taken with Minnie during our first ever visit to Disney World. She’s had photos taken with Minnie on every subsequent trip. When asked what she wanted as a take home souvenir from Disney the last time we went she went right for a large Minnie Mouse plush. So, I knew that when I got this Shop I was going to be looking for a Disney Junior Minnie Mouse Costume. What I didn’t know but was pleasantly surprised by was the party supplies that I would find. Here is a video of our finds.

END_OF_DOCUMENT_TOKEN_TO_BE_REPLACED

When I attended Toy Fair back in February I had the special privilege of attending the Disney Consumer Products showcase and it was there that I learned about Star Wars Rebels. The show’s star, Freddie Prinze, Jr. (the voice of Kanan) was there to introduce the show. He came out and showed us some clips and then was hauled away by Storm Troopers. I’ve been waiting for months for the show to finally air and now it has. The show was introduced on September 26 with a 43 minute episode called Spark of Rebellion, #SparkRebellion. This mini movie was then released as a DVD that is a Walmart exclusive from 10/3 to 10/13. I was asked by #CollectiveBias to go and check it out and get myself a copy of the DVD and some Star Wars Rebels toys. I was only too happy to do so. This would be the show that would be the gateway for my kids into the Star Wars Universe.

Star Wars Rebels follows a group of rebels that includes Kanan, Hera, Zeb, Chopper and Sabine. This crew of The Ghost is taking on the ever expanding Empire all over the galaxy. The story is set five years before the events of A New Hope. The Clone Wars are over, people are being oppressed by the Empire, and the Jedi have been decimated and those left are in hiding. Kanan and his crew land on a planet and attempt to pull a job to steal supplies from the Empire. Their attempts are interrupted by streetwise pickpocket and petty thief, Ezra. What happens next is an exciting thrill ride through the galaxy. There are rescues, betrayals, lightsabers and space battles. There may even be a character or two that you may already know. There are also a bunch of extras on the DVD and a 3D model for The Ghost that was inside the package. END_OF_DOCUMENT_TOKEN_TO_BE_REPLACED