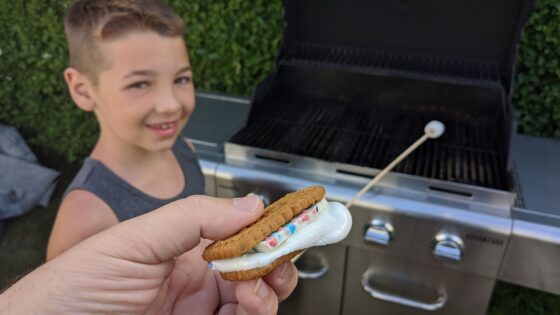 The kids have discovered Biscoff cookies. I brought some home for a snack to enjoy during work and Eva found them. She found them and decided that she loved them! Eva and I discussed the possibility of using them to make S’mores. So, for the 4th I picked up some Red, White and Blue Hershey’s Chocolate bars. We made them tonight and they were pretty tasty. I think that next time I’m going to make inside-out S’Mores. I make those by roasting an extra large marshmallows and then stuffing it with the chocolate and cookie. We’ll make those at home over the fire table.

Let’s just say that I have a greater appreciation for what my wife goes through when the kids don’t want to eat what she has made.

I’ve been putting the latest Cooper & Kid Kit through its paces with the kids and with that I decided to make all of the food suggestions from the kit. So, yesterday I went shopping with Andrew and got everything needed to make the snack, the drink, the main meal and the dessert. I spent a couple of hours working on the meal only to have Eva ask me about every single ingredient and then not drink the drink, eat the snack and she sort of picked at her main meal then she barely ate the dessert. I never thought that she was so picky before but she didn’t like one aspect of at least every item. I’ll give her a pass on the drink since it I made it with Bold Ginger Ale. I think I would have skipped Ginger Ale all together and substituted Sprite or something else. That probably would have been more pleasing and she ‘might’ have drank it. And it was a complete shock that she no longer likes black olives and hummus. It was frustrating to say the least.

The overall theme of the latest Cooper & Kid Kit is Bugs. It is “The Good, The Bad and The Bugly”. Each meal item had a bug related theme including the main meal of little bugs made out of mini meatballs and chow mein noodles. Everything looked cute and was pretty tasty. Dessert was Dirt cups so how do you go wrong with that? Unless your kid doesn’t like pudding, what kid doesn’t like pudding, oh yeah… mine.