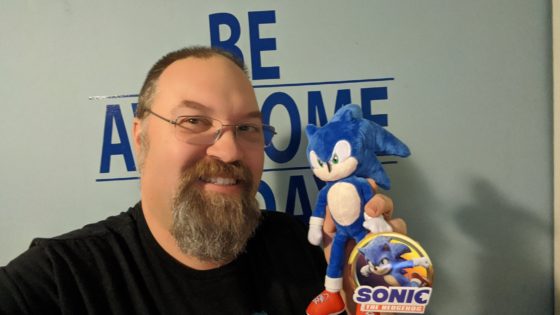 My friends from CT & Co. sent me a swag box of fun Sonic the Hedgehog thins from the upcoming movie. Opinions are my own.

Today I had Andrew home again with me. What I had forgotten was that I had an eye exam scheduled for 8am and when I was going upstairs after Allison and Eva left for school I saw on my phone that I had to be at the appointment. Let’s just say that I could have used Sonic’s speed to get over to the appointment. As it turned out I was able to get Andrew dressed and out the door and make it to the appointment by 8:15am. Not sure how I pulled that off. I also took Andrew with me to my Krav Maga class this morning. It was interesting to do the class after getting my eyes dilated. Glad the class does not involve trying to read things because my eyes were blurry for hours. 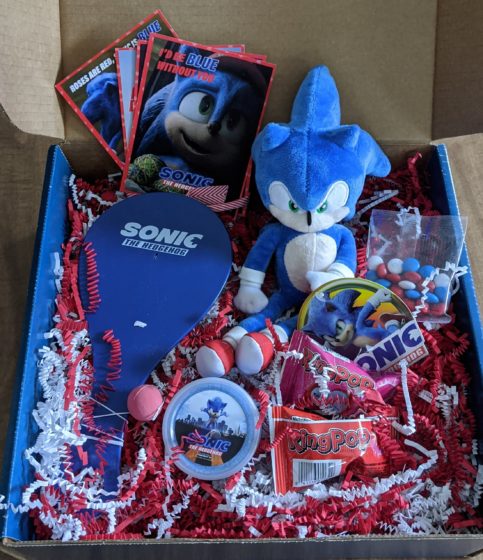 They did clear up later on when I got a fun care package for the Sonic the Hedgehog movie. I a actually looking forward to seeing this. It was nice to be remembered and included in this activation for the movie. We were invited to see the movie this past weekend but we couldn’t make it because of my work schedule.

Inside the box were a bunch of fun things and one of them I can share with you and that would be Sonic Valentine’s Day Cards. You can download them by clicking the image below and then print them out. 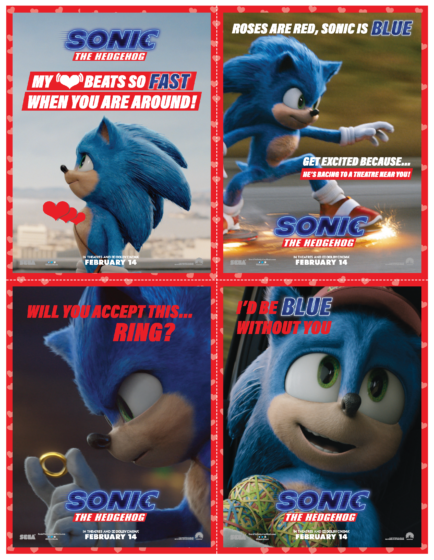 SONIC THE HEDGEHOG is a live-action adventure comedy based on the global blockbuster videogame franchise from Sega that centers on the infamously brash bright blue hedgehog. The film follows the (mis)adventures of Sonic as he navigates the complexities of life on Earth with his newfound – human – best friend Tom Wachowski (James Marsden). Sonic and Tom join forces to try and stop the villainous Dr. Robotnik (Jim Carrey) from capturing Sonic and using his immense powers for world domination. The film also stars Tika Sumpter and Ben Schwartz as the voice of Sonic. I picked up Andrew after school today and we headed over to my parents house. He now enjoys climbing ladders as you can see. I also had no fear at 5 years old. But back to the reason I was at my parent’s house in the first place. I was going there to help out with their new Comcast X1 Xfinity boxes and router and more. I set up a couple of their TVs and also the Router. The downstairs TV took some doing because it was just old enough that it doesn’t have a dedicated HDMI plug. It did have a DVI plug and so yesterday I went and got a DVI to HDMI adapter and thought I was all set but was wrong. The DVI to HDMI plug only does video and not audio. Getting Audio and video was through some old AV plugs and the picture was not good. So I saw the optical audio plugs and thought that a wire for that would work. Unfortunately, both the DVR and TV had outputs. Eventually I got HD video and sound by playing around with the plugs and trial and error. That is usually how I fix things.

Tonight I went to my buddy Brian’s house to record SteamDads. We tried an experiment and it did not work. So we did a couple of other things instead. They ended up working out pretty cool but our video is going to be an interesting one and we are staying away from chemicals for a while.

I made today’s video late at night before bed. I’ve got a ton of toy reviews to finish up before Christmas. I’m just getting many thing sent to me, which is not a bad thing. However, I’ve gotten a bit behind. All the toys in the video will need reviews by the end of next week. That way people have enough time to go and buy the ones that they like the most.

I’m also doing a giveaway of the Gremlins Team Pack. Here is how to enter.

1. Go to the video. – Click it below to watch on YouTube.
2.Subscribe to my Channel.
3.Leave me a comment on this video telling me what Lego Dimensions set you want for Christmas and I will choose one winner. I’ll choose a winner 12/15/16