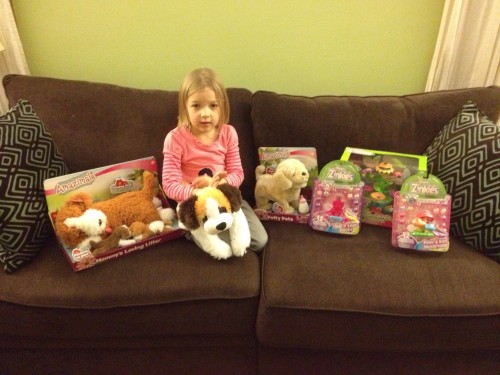 Blip toys has sent me so many great toys over the past few years and for my Christmas is for Kids Give it Forward project they came through with even more great stuff. We were sent multiple boxes of toys from their Amazimals and Squinkies Zinkies lines. Amazimals are a brand new line of interactive plush pets. Amazimals feature animatronic functions so that they can interact with your child. From wagging tails to barking and laying down and shaking hands to even using the potty. These pets can do so many things. Out of the three pets that we were sent I let Eva select one for our review and for her to keep and play with. She Peppy’s Puppy Tricks as her new Amazimals pet. she renamed her Pepper though, right out of the gate.

END_OF_DOCUMENT_TOKEN_TO_BE_REPLACED

The christmas is for Kids Give it forward Project is going strong. When we came back from our trip to New York City there was a huge box and four smaller boxes with all sorts of things for me to review and much to give to Christmas is for Kids. I received a giant box of Batman Power Attack figures from Mattel. They are part of a box to throw a Batman Power Attack party but I was able to get the box to review and donate many of the toys to Christmas is for Kids. There are a ton of great figures that are going to be donated. I kept and reviewed a few Batman figures and one Robin figure plus the Total Destruction Batmobile. That is a pretty sweet ride. Eva and I made a video of that today and we’ll have that up in a few days.

We also received multiple packages from Blip Toys including their new Amazimals line of toys. We got three puppies that each do something different. Eva got to choose one of them to keep and review. The rest are going to Christmas is for kids including a Squinkies Zinkies set.

And last but not least was the stuff that we got from our trip to the Activision Family Game Summit in New York. Allison and I each got a bag and the bags were filled with video games, toys and more. We kept some of the stuff for ourselves and are going to buy a family Nintendo 3Ds to play all the games and we also kept some for gifts for friends as well. But the bulk of what received is going to Christmas is for kids including $20 in Target gift cards for what we as a family are going to buy. We need to do that shopping soon.

Be on the lookout for toy reviews coming very, very soon.