We celebrated Andrew’s birthday with friends today. We had our friends Holly and her kids come over for pizza and cake. Allison made an amazing cake with the theme of Sugar Rush or rather Wreck-It Ralph. She made a double-decker yellow cake with gummy worms, M&Ms, jelly beans and gumdrops. The cake was great.

We had a really nice time with the kids. They played well together and enjoyed the meal. Andrew received a very nice Fireman’s costume and a giant fire truck puzzle. It was about 4 feet long and perfect for Andrew and his love of puzzles.

Andrew also received some Teenage Mutant Ninja Turtles Half-shell Heroes toys. These are some cute toys for younger kids. I wrote a review of those toys over on Cooper & Kid. 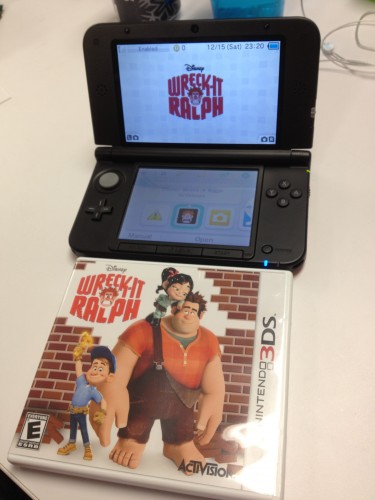 Back in November Allison, Eva, Andrew and I traveled to New York City for a family trip as well as to attend the Activision Family Game Summit. When we left we left with a couple of crazy awesome swag bags of great Activision titles for families. One of those games was the 3DS version of Wreck-It Ralph.

The Wreck-It Ralph game picks up where the movie leaves off. Things are getting back to normal in the arcade when the cybugs get loose in multiple games and it is up to the team of Fix-It and Wreck-It to save the invaded games. You get to play as Fix-It Felix, Jr and Wreck-It Ralph. Each character has his own unique abilities. Ralph can smash things and is much stronger than Felix. Felix though is faster and can jump higher. Each level has multiple places where you must switch between characters in order to complete the full level. As you make your way through the level there are wide chasms to jump, ladders to climb, walls to break and more. Switching between the two characters is simple.

I was expecting more out of this game. There are three worlds that you travel through and despite the names they are basically the same. There is the world of Fix-It Felix. Jr, Hero’s Duty and Sugar Rush. Each level is essentially the same thing just re-skinned. I would have loved to have seen this broken down more to the types of games they were in the movie. the Fix-It Felix Jr level could have remained as is the old school side scrolling platformer. Hero’s Duty could have been like a first person shooter or even a third person one (build it on the 3DS Skylanders gaming engine would have been amazing, and an Activision property) where Ralph teams up with Sargent Calhoun. And Sugar Rush could have been a racing game with Ralph and Vanellope von Schweetz teaming up.

The game was entertaining but got repetitive quickly. I banged through almost all of the levels easily. The Wreck-It Ralph 3DS game is fun for a while but won’t stand up to repeated play.

Disclosure: I received this game for free. I’m under no obligation to review it. Opinions are 100% my own.