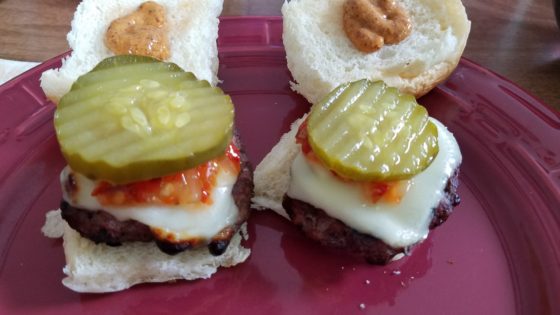 We’ve been trying to cut down our portions and eat better. Today’s photo is of some mini sliders that we made for dinner tonight. A cheeseburger with wickles, a pickle and some sriracha mustard. Then a nice salad and some milk. And I even packed things for snacks at work. All help from the dietician and Allison.

It was a good day for decluttering the house. I worked on packing up the DVDs and old games that we were selling to decluttr. This is an online service where you scan in all of your DVDs, CDs, Games and other item, box them up and send them for free to decluttr. They then pay you for the items. You know what they will pay for each item when you scan them. Suffice to say they don’t pay much but that isn’t the overall objective. The overall objective is to declutter our house. These movies and games haven’t been touched in years. They are just taking up space and won’t be missed. It is finding out what to do with the rest of the ones that do not qualify for decluttr that is the issue. Some games can’t be scanned to be sold because they are part of a set. Others go with items like Guitars from Guitar Hero. I may keep that just because the kids might enjoy that when they get a little older. I sent three large boxes to decluttr.

While I was doing the DVDs and video games Allison was tackling the bookshelf and we have a huge donation for the library. I’ve got to go through the books too and that will clear out a bunch more. I hope the library will still be collecting donations.

When I went to the UPS Store to drop off the boxes for decluttr I went to the comic book store to pick up my comics. I am so behind on reading them at this point. I’ve got to start taking some time to go through all the ones I’ve gotten and read them all. Then read the ones I’ve been picking up for Eva so that she can read them with me.

In addition to comics books I need to read I also received two new books from Disney Press. I got them for free and am under no obligation to do anything particular with them. However, I highlight them in today’s vlog and will tell you about them below. These are books pertaining to Disney’s The Haunted Mansion. One is an illustrated book with the lyrics to the classic song “Grim Grinning Ghosts” the song that plays while you are on the ride. The illustrations are beautiful and it comes with a CD featuring the song “Grim Grinning Ghosts” and this is one of the first of the Disney Parks Presents picture books. A must have for any Disney Parks obsessed fan. This book is on sale now for $14.99 and is for ages 3-5, or that Disney kid who never grew up.

The second book is a short novel called “Tales from the Haunted Mansion: Volume 1: The Fearsome Foursome”. This is the first book in a series that will highlight one of the 999 ghosts from the Haunted Mansion. If anyone has 999 stories to tell it would be Disney. The book is for ages 8-12 and has some spooky fun. The book centers around The Fearsome Foursome – four kids who look to out-scare each other. However, they may be the ones completely scared when they find out what Amicus Arcane the librarian and host, Ghost Host, has to tell them. This book goes on sale July, 19 for $14.99.